A pizza “stone” that does so much more

The Lodge 14” Cast Iron Baking Pan makes amazing pizza, and it’s an affordable option, even if that’s all it’s ever used for. However, it’s also the perfect pan for other purposes, making it quite the bargain if you’re comfortable with the weight.

We purchased the Lodge 14” Cast Iron Baking Pan so our reviewer could put it to the test in her kitchen. Keep reading for our full product review.

The Lodge 14” Cast Iron Baking Pan is obviously made for baking pizzas, and we put that to the test with thinner, thicker, larger, and smaller pies. Speaking of pies, we also baked a crostata, just to test its ability. We roasted a spatchcocked chicken, we toasted tortillas on the stove, and we brought the pan outside and introduced it to our grill. We used our favorite homemade pizza dough, we bought cheap pizza dough, and we even used the pan for some inexpensive frozen pizza. In between all of the cooking, we scrubbed it clean and seasoned it more, watching the pan darken over time. We’ve made our final decision, and we’ve got lots to tell.

Since this pan was designed for pizza, its shape makes sense—it’s large and round with just a small rim. While most pizza stones don’t have a rim at all, we found that addition wasn’t a detriment at all. In fact, it was actually quite useful, both when making pizza and when we decided to try cooking other foods. Because of the rim, the pizza had a stopping point when we slid our pizza peel underneath, so we didn’t need to worry about the pizza scooting off the back of the pan. The slight rim also made us confident enough to cook foods we wouldn’t even consider with a standard pizza stone. We certainly couldn’t cook a stew in it, but we used it for roasting a spatchcocked chicken, and on the stovetop, cooking burgers, toasting tortillas, and making quesadillas. It’s also great for reheating pizza by first heating it on the stove to warm the bottom, then placing it until the broiler just long enough to re-melt the cheese and warm the toppings.

Because of the rim, the pizza had a stopping point when we slid our pizza peel underneath, so we didn’t need to worry about the pizza scooting off the back of the pan.

The handles deserve a mention, since they’re large enough and angled perfectly to be easy to grab, even when we were protected with serious mitts. The handles get as hot as the pan, so mitts are required, no matter how the pan is being used.

This pan is made from cast iron, which is a heat-retentive material. That means it takes a little time to get hot, but once it’s hot, it stays that way. That’s very useful when making a pizza, since putting the pizza on the pan doesn’t cool the pan very much. Cast iron is also a heavy material. This pan is especially heavy because of its size, but not prohibitively so. Fortunately, the handles made it easier to move around, but extra care should be taken when moving it when it’s hot. The material is also quite durable, which means this pan should last for decades unless it’s severely mistreated, and it will only get better over time as the seasoning improves with continued use. Prior to this review, we had one of these pans in our kitchen for at least a decade, and we still aren’t tired of using it.

The material is also quite durable, which means this pan should last for decades unless it’s severely mistreated.

We like that it stays hot for quite a while after cooking, but because of the handles, we were able to remove it from the oven or grill using sturdy mitts or gloves. Because of that heat, we were able to leave pizza on the pan, and it stayed hot, even when we went back for another slice. However, because it’s still very hot, we suggest making sure your surface is heat-safe. We opted to place it on a large wooden cutting board rather than putting it directly on our table.

This pan needs to be treated like any other cast iron cookware. While it was pre-seasoned when it arrived, extra seasoning makes it more nonstick and less vulnerable to rusting. When cooking pizza, it needed very little cleaning aside from brushing off crumbs—unless we lost some cheese or sauce, and even then, it was easy. The roast chicken was a little more of a challenge for cleaning, but it still wasn’t terrible.

When cooking pizza, it needed very little cleaning aside from brushing off crumbs—unless we lost some cheese or sauce, and even then, it was easy.

For cleaning cast iron, we like using a stainless steel chainmail scrubber for the tough bits, but a simple scrubbing with some coarse salt and a sponge also works very well. When using the pan in the oven or on the grill, leaving it in the heat for a few extra minutes often served to burn off bits of food, much like you’d burn food off of grill grates. Then, a simple swipe and rinse was enough. While it’s a general rule that you shouldn’t clean cast iron with soap lest it ruin the seasoning, once the pan is very thoroughly seasoned, a little soap won’t harm it if you have some difficult cleaning.

Price: Affordable for the value

This pizza “stone” is more expensive than cast iron frying pans, but its size and versatility make it quite a bargain. On the stove, it can be used for any foods that don’t have a sauce and won’t produce an excess of liquid when cooking. That means it’s great for burgers, French toast, grilled cheese sandwiches, and much more. In the oven, the same caveat applies—you don’t want liquids dripping over the edge.

Aside from the material, these pans are very similar in terms of their use. While the Emile Henry Pizza Stone is made from ceramic, it’s a special ceramic that can be used on the stove and on the grill. It has reasonable handles, but it doesn’t have the lip that the Lodge pan does. What the Emile Henry pan has going for it is its looks. It would make a very nice serving tray, even for a non-casual event, whereas the Lodge is definitely rustic. However, the Lodge pan is nearly indestructible, while the Emile Henry would most likely break if it was dropped.

It’s hard to find fault with this pan: The Lodge 14” Cast Iron Baking Pan is reasonably priced and nearly indestructible, so it will be around for decades. Its versatility makes it even more appealing; no matter what we cooked, we knew there was more we could do with it. 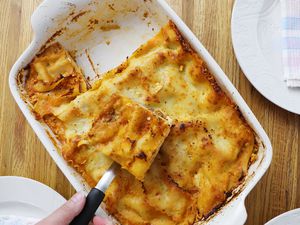 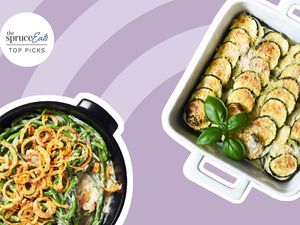 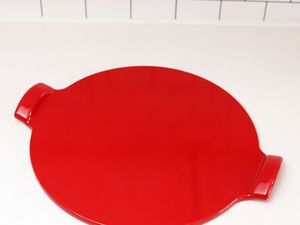 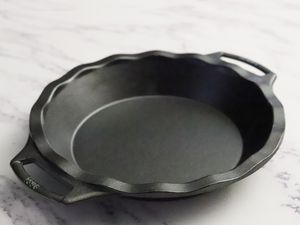 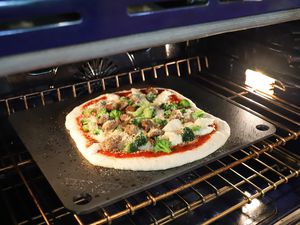 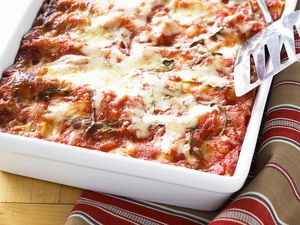 The 8 Best Lasagna Bakeware Pans in 2022 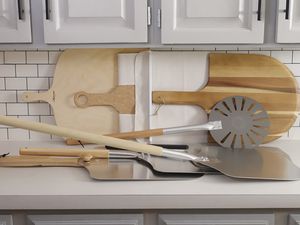