Later harvest, shorter growing season, and more dependence on cool-weather and storage crops mark Montana seasonal eating. Exact crop availability and harvest times vary year-to-year, but this summary will help you know when to look for what at markets near you. You can also look up produce by seasons (spring, summer, fall, winter) or region. Or, check out this General Guide to Seasonal Fruits & Vegetables for national seasons.

Apricots, August. Look for bruise-free fruit that feels heavy for its size.

Asparagus, May through August. The spears will get fatter as the season goes on, but skinny spears don't indicate great flavor or tender texture, growing practices and freshness do.

Basil, August and September. If you end up with giant bunches, freeze it or turn it into pesto.

Beets, June through October. Early in the season smaller beets, often with their leafy greens, will be available.

Blueberries, July into August. Avoid bruised blueberries, since they will spoil quickly, even in the fridge.

Broccoli, June through October. Get the most from fresh broccoli—know that broccoli leaves cook up just like kale.

Brussels sprouts, August through mid-November. Look for them sold on their stalks for ultimate freshness (but cut them off and store them off-the-stalk once you get them home!).

Cabbage, June through October. as with most produce, choose cabbage that feels heavy for its size.

Cantaloupes, August and September. These melons should smell like how you hope they taste.

Cauliflower, August through November. As with broccoli, any leaves attached to the head of cauliflower are edible—use them just like collard greens or kale.

Chard, July through September. Look for stems without too much, if any, browning, and firm, shiny leaves.

Cherries, July and August. Cherries should be plump and shiny.

Corn, August and September. You want husks that cling tightly to the cob and look fresh and a tad moist without being damp.

Cucumbers, July through September. The insides really can be much cooler that the ambient temperature.

Garlic, August through November (available from storage through winter if properly cured).

Grapes, September. Taste one before buying to make sure that bunch meets your sweetness needs.

Green beans, July through September. Bend a bean—it should snap in a jiffy.

Green onions, June through September. Look for firm onions, no browning or wilting of the green fronds.

Greens (various), June through October. Pick bunches with vibrant looking leaves and stems without much browning.

Herbs, July through October. All herbs should seem freshly picked and smell intensely of their flavor.

Huckleberries, August and early September. These delights grow wild in parts of western Montana and can be found at foragers' stands at farmers' markets and in specialty stores.

Leeks, August through October. Be sure to wash between the layers, or even after chopping or slicing, to get any and all grit out from between the leaves.

Lettuce (various), June through September. No browning, no wilting, and fresh-cut ends are signs of fresh lettuce.

Melons, August and September. As with all fruit, melons should feel heavy for their size. Some people like to knock them and hear water.

Mint, April through October. Bright, firm-looking leaves and a bright minty scent are what to look for.

Parsnips, April and May and again in October through November (local harvest available from storage through winter).

Pea greens, June and July. These are the vines of pea plants; they are delicious raw in salads or quickly sautéed.

Peas, July through August. Taste a few, if you can, before buying, to make sure they're as sweet as you expect.

Peppers (sweet), July through September. Tight, shiny skins and peppers that feel heavy for their size are the ones to buy.

Pumpkins, October. If you want to eat them, make sure they are a variety meant for human, not animal consumption (those sold to be carved as jack o' lanterns, for example, don't have much flavor).

Radishes, May through October. If bugs and rain haven't had their way with the leaves attached to radishes, they make a nice addition to salads.

Raspberries, June into August. Choose raspberries without any mold or mushiness, since one bad berry will turn a whole pint overnight.

Rhubarb, May through June. Choose firm stalks with fresh cuts and no browning.

Rutabagas, October through November (available from storage into spring).

Spinach, May through October. As with all greens, look for vibrant leaves with no wilting or browning.

Strawberries, June and July. Strawberries should smell just as fragrant and intense as you hope they'll taste.

Tomatoes, July through early October. Remember to keep those tomatoes out of the fridge—cold temperatures turn them mealy.

Watermelons, August through September. Heavy, heavy, heavy is what you seek.

Zucchini, July through October. Big zucchini can be fairly woody, so look for smaller ones that feel heavy for their size.

Zucchini Blossoms, June through August. Fry these up, or just chop them and toss them into salads. 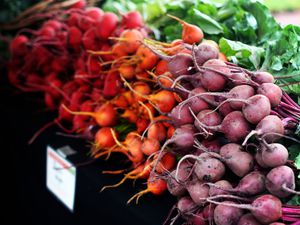 Guide to Manitoba Fruits and Vegetables