The Moscow mule is a spectacular mixed drink that is also incredibly simple. There are no big secrets to making a great Moscow mule—all you need are vodka, ginger beer, and lime juice. It doesn't require shaking or any special bar tools, so anyone can mix it up in minutes. This casual vodka cocktail is great for any occasion and has a snappy spice that is refreshing and invigorating.

The Moscow mule recipe dates to World War II. The drink came back into the spotlight in the 21st century, and it is one of the hottest bar drinks in the world today. This resurgence introduced a new generation of drinkers to the great taste of the Moscow mule. It has also led to a few misconceptions, including the prolific use of ginger ale.

If you want to go the traditional route, serve your Moscow mule in a copper mug. In addition to making a handsome drink, the mug keeps the cocktail well chilled, even on hot days. Some drinkers believe that it adds a nice flavor to the drink, too. A mug is not required and the drink is equally refreshing in a normal glass.

Click Play to See This Moscow Mule Recipe Come Together

"The Moscow mule is as classic as vodka cocktails get. It's about as easy to make as a gin and tonic. Don't worry too much about making lime juice ahead of time. Squeezing in the juice from a wedge or two is enough." —Tom Macy

Contrary to the name, ginger beer is nonalcoholic, though the original British version did include alcohol. The majority of modern ginger beer is a soft drink and a spicier version of ginger ale that's typically made with real ginger. Good ginger beers can be drunk straight and make an excellent cocktail mixer.

Can You Make a Moscow Mule With Ginger Ale?

Many people, including bartenders, have been making the Moscow mule with ginger ale or citrus soda for years. If you want to keep it authentic, then this cocktail requires ginger beer. Technically, if you pour ginger ale, you're making a vodka buck. It's a vodka press with lemon-lime and club sodas, and club soda alone makes it a vodka soda.

What Is the Best Ginger Beer for a Moscow Mule?

There are many impressive ginger beers to choose from today. The options are increasing all the time, thanks in large part to this particular drink. Each brand varies in the ginger's intensity as well as the sweetness. Some have a softer spice reminiscent of ginger ale, while others are very strong and unforgettable. Two ginger beers that were developed specifically for cocktails are Q Ginger Beer and Fever-Tree Ginger Beer. Both make an excellent mule and fall right in the middle of the extremes.

How Strong Is the Moscow Mule?

The average Moscow mule is fairly tame, though it will vary with more or less ginger beer. If you pour an 80-proof vodka with 4 ounces of ginger beer, the alcohol content is just 11 percent ABV (22 proof). In general, it's equivalent to the average glass of wine.

Along with drinks like the white Russian, the Moscow mule was designed to sell vodka to U.S. drinkers in the mid-20th century. Before that time, vodka was relatively unknown to Americans, though it didn't take long for them to fall in love with the clear spirit.

There are a couple of claims to the invention of the Moscow mule. One dates to 1939 at the Cock 'n Bull pub in Hollywood. The story goes that the bar's owner, Jack Morgan, partnered up with Smirnoff Vodka's John Martin to promote the vodka and the bar's house-made ginger beer. Apparently, it was a winning situation for the team because both beverage brands are alive and well today.

Another story jumps ahead to 1941 at the same bar when the head bartender, Wes Price, needed to unload some liquor that wasn't selling. This successful promotion was enhanced by a marketing campaign in which a Moscow mule made with Smirnoff was served in copper mugs. The mugs became the drink's trademark vessel, the campaign was a success for the Russian vodka, and the mule was a smash hit.

Is It Safe to Drink From a Copper Mug?

The popularity of the Moscow mule's copper mug has brought up the possibility of copper toxicity. The concern is that acidic food and drinks can leach copper out of unlined copper vessels, and the U.S. FDA has guidelines for establishments that use this material.﻿﻿﻿ Experts say that a drink would have to sit in the mug for hours to get a harmful amount of copper, and it is not advised to store acidic food or beverages in copper. However, most copper mugs sold today are lined with nickel, stainless steel, or another food-safe coating and are perfectly safe for drinks. 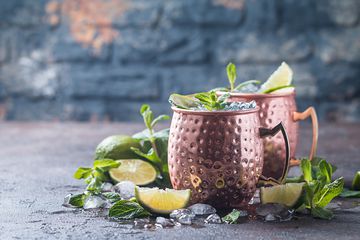 Since this is such a popular cocktail, it's no surprise that the Moscow mule has served as inspiration for many more drink recipes. It's the perfect base for experimentation, and you can really have fun playing with its flavors.