Christmas in Italy wouldn't be complete without two classic cakes: the panettone from Milan, and its sister cake, the pandoro from the northern Italian town of Verona. Like panettone, pandoro (meaning "golden bread") has a light, fluffy, yeast-risen golden interior and a browned outer surface. However, unlike panettone, it does not contain candied fruit or raisins, which makes it the preferred Christmas cake of many. Pandoro also looks like a Christmas tree—a towering, star-shaped cake topped with snowy white confectioners' sugar.

Most Italians prefer to buy commercially produced pandoro from their local baker or supermarket as it is time-consuming to make, requiring four separate lengthy risings and three resting periods after the dough is rolled out. Because the sweet and buttery cake is so simple in its taste, however, commercial versions often contain some sort of filling, such as limoncello or chocolate cream. This recipe, however, doesn't require a filling.

If you are an accomplished and devoted baker, however, making it at home can be quite rewarding. You'll need a high-sided pandoro mold. The molds used in Verona are about 10 inches/25 cm high, 8 inches/20 cm across at the top, tapered, and star-shaped in cross-section, usually with 8 points. The pan can be purchased online, but if you cannot find one, a similarly tapered cylindrical mold will do.

Learn the Different Types of Yeast for Baking, Cooking, and Brewing 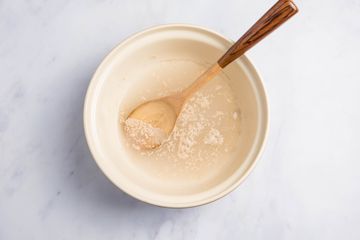 How Do You Slice a Pandoro?

How to Store and Freeze Pandoro

Pandoro should be wrapped in plastic wrap and placed in a zip-close bag. It can be kept at room temperature for up to 7 days.

For longer storage, wrap tightly and freeze. Defrost in the refrigerator before toasting or reheating in a low (about 325 F) oven.

You can make your pandoro more festive looking by adding a flavorful filling and colorful decorations. Begin by slicing the cake horizontally into 5 pieces. Then spread a creamy filling, such as sweet lemon mascarpone or lemon curd, onto each layer, arranging the cake layers on top of each other at an angle so the points alternate (it will look like a Christmas tree). Feel free to add nuts such as pistachios to the filling for crunch, and chopped red fruits or whole berries along with fresh mint leaves to the top for color.

20 Beautiful Christmas Cakes to Make for the Holidays