Ruby-hued red velvet cake topped with a rich cream cheese frosting has been a favorite American dessert since the turn of the last century. The Adams Extract Company claims to have created the “original” red velvet cake in the 1920s. However, The Waldorf Astoria Hotel in New York City also claims it is the birthplace of the red velvet cake, with it being a popular menu item in the 1950s. This red velvet cupcakes recipe was inspired by this sweet history.

One of the lingering questions about the typical ingredients in a classic red velvet cake surrounds the use of white vinegar in the batter. During World War II baking staples like sugar and butter were rationed, and some bakers began adding beets or beet juice to their cakes. The red from the beet juice made the cakes more appealing, and the beets also acted as a filler and kept the cakes moist. However, when beet juice is in too alkaline of an environment, it tends to bake into a bluish hue rather than the red velvet color we associate with this cake.

By adding vinegar to the baking soda in the recipe, the environment becomes more acidic, resulting in a beautiful red cake. Although, nowadays most bakers tend to use red food coloring which isn't reactive to pH changes, the tradition of adding vinegar to this cake remains.

This recipe is a variation on the classic red velvet cake in the form of single-serving cupcakes. They are perfect for creating a cupcake display at a party!

The Most Decadent Red Velvet Desserts 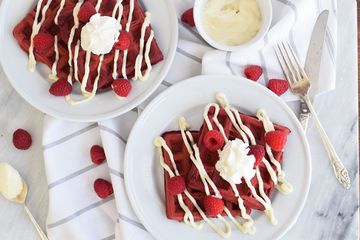