Thickening Your Sauces With Roux

Roux (pronounced "roo") is a mixture of equal parts (by weight) fat and flour that is used for thickening sauces and soups. Traditionally, roux is made with clarified butter, but you can use fats such as lard, bacon fat, or vegetable oil too.

Likewise, any starchy flour, such as rice flour or potato flour, can be used for making a gluten-free roux.

How Roux Is Made

Roux is made by stirring the flour into the melted butter and then cooking it for a few minutes so that the floury taste cooks off. Then, the roux can be used or cooked further to develop more color and a toasty flavor.

The reason for preferring clarified butter (which is the pure butterfat left over after the water and protein solids have been separated and removed) is that the water in whole butter can cause the starches to gelatinize before the roux ever makes it into the sauce.

The sauce is essentially a liquid, a thickening agent, and flavoring ingredients. When you thicken a sauce with a roux, the starches in the flour expand and absorb the liquid. But with whole butter, which is 15 percent water, the starch molecules start to absorb the water from the butter. This makes the roux more difficult to work with, and also diminishes its thickening power since some of the starch molecules are already saturated.

The roux can be incorporated by whisking liquid-like hot milk or stock into the roux. Or it can be added to soup and stirred in to thicken it (although this technique can sometimes lead to clumping).

Three of the five mother sauces of classical cuisine are thickened with a roux: the velouté, the béchamel, and the espagnole.

Cooking the roux longer produces a darker color. Traditionally, there are three shades of color roux can take: white, blond and brown. Obviously, these are not discrete colors but rather shades on a spectrum. But for a white sauce like béchamel, the roux should be as close to white as possible—cooked only long enough to get rid of the raw flour taste. For a velouté, a blond roux, which is a pale yellow and takes about five minutes to achieve. And for an espagnole sauce, a brown roux, which might take 10 to 15 minutes of gentle cooking.

The darker the roux, the nuttier, almost chocolate-like, the flavor will be. Indeed, in Cajun and Creole cooking, gumbo is made with a dark roux that's cooked for 20 minutes or more. To get an even darker color, some cooks will brown the flour in a dry skillet before beginning the steps to make the roux.

Note, however, that the darker the roux, the less thickening power it will have. 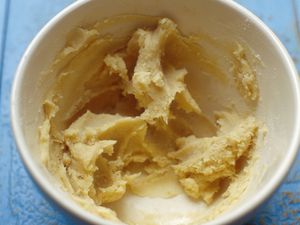 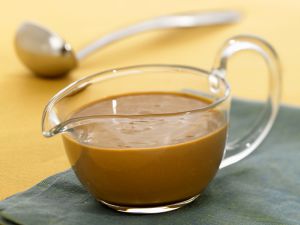