Many times the names "sweet potato" and "yam" are used interchangeably in conversation, in cooking, and even at the supermarket, but they are really two different vegetables. Although they are both root vegetables, they belong to two different plant families—the sweet potato is from the morning glory family while the yam is related to the lily. Yams are starchier and less sweet than the sweet potato and can grow much larger.

The fact that yams and sweet potatoes are mislabeled on cans and in recipes can cause a lot of confusion. Here's how to tell them apart and cook them properly.

Sweet potatoes belong to the genus Ipomoea. They are thought to have originated in Central or South America and are popular in the American South and available across the globe.

Sold year-round, sweet potatoes have an extended shelf life due to a curing process after harvest which increases their storage capabilities over a year. You will find sweet potatoes pre-peeled and cooked and sold in cans or frozen.

There are two main types of sweet potatoes, both of which are elongated yellow or orange tubers that taper to a point at each end. The paler-skinned sweet potato has a thin, light yellow skin and pale yellow flesh. It's not sweet and has a dry, crumbly texture similar to a white baking potato. The darker-skinned variety (which is most often and incorrectly called a yam) has a thicker, dark orange to reddish skin with a sweet, vivid orange flesh and a moist texture. Current popular sweet potato varieties include Goldrush, Georgia Red, Centennial, Puerto Rico, New Jersey, and Velvet. There is also the Purple Sweet Potato.

The sweet potato is used in both savory and sweet dishes, most often baked, mashed or fried. When it is pureed it can be used in soups as well as baked goods and desserts, including, of course, sweet potato pie. It has also become a staple on the Thanksgiving table, most often as sweet potato casserole with marshmallows.

The true yam is the tuber of a tropical vine (Dioscorea batatas) and is not even distantly related to the sweet potato. It's a popular vegetable in African, Latin American, and Caribbean markets, with over 150 varieties available worldwide, and slowly becoming more common in the United States.

The yam tuber has brown or black scaly skin which resembles the bark of a tree and off-white, purple or red flesh, depending on the variety. They are at home growing in tropical climates, primarily in South America and the Caribbean, as well as Africa, where they originated. In Spanish, they are referred to as batata, boniato, and ñame. Generally starchier and less sweet than the sweet potato, some varieties of this tuber can grow over seven feet in length and top 150 pounds.

A staple in West African cuisine, yams are most often boiled, roasted, or fried. Their long shelf life of 6 months allows them to be a dependable food source during times of poor farming. Purple yams are found in Japan, Indonesia, Vietnam, and the Philippines and are often used in desserts. In parts of the United States where yams are not popular, most major supermarkets don't carry them—to find yams go to specialty markets selling Caribbean, Asian, or African foods.

The Root of the Confusion

From the African words njam, nyami or djambi, meaning "to eat," comes the English word "yam." Enslaved Africans in the Americas began calling the indigenous sweet potato "yam" because it reminded them of the food staple they knew in Africa. For this reason, throughout the American South, the term is commonly applied to sweet potatoes.

Interestingly, the confusion is not limited to the Americas. In Malaysia and Singapore, "yam" refers to taro. And in New Zealand, the oca is called a yam. 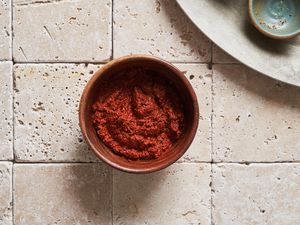 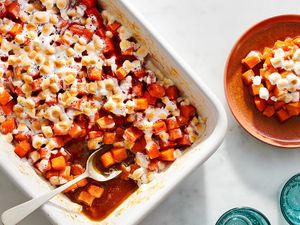 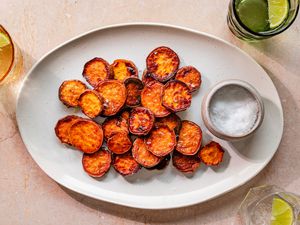