The Swiss make hundreds of different cheeses, so the generic name Swiss cheese is a bit of a misnomer. It refers to a mass-produced cheese sold in North America that is vaguely reminiscent of the true Swiss variety called Emmenthal, a cheese with a semihard texture and distinctive holes. The Swiss cheese commonly packaged in slices for sandwiches in the United States shares a similar appearance, though it tends to be a bit paler in color and shinier, with a milder flavor. Most Swiss cheeses—both the domestic version and those produced under the strict appellation d’origine protégée (AOP) standards in Switzerland—start with cow's milk, making them high in calcium and protein; Swiss cheese also delivers a healthy dose of vitamin B12.

What Is Swiss Cheese?

The two most famous Swiss cheeses are Emmenthal and Gruyère, varieties highly prized in fondue for both their flavor and their melting ability. They are readily available in the U.S., usually at a mid-range price point. Emmenthal, the model for the American version of Swiss cheese, is a semihard yellow cheese with a mildly nutty flavor, a subtle aroma of hay, and holes of varying sizes. A young Gruyère has a softer paste with far less noticeable holes but a similarly mild taste. It gets more granular and sharper in flavor as it ages.

Swiss cheese often appears in cartoons featuring mice, but contrary to the animated notion, the holes do not represent a mouse's snack. Theories differ, but one school of thought is that bacteria consume the milk's lactic acid and then release carbon dioxide gas bubbles, which get trapped as the paste hardens, leaving the holes. This story circulated for more than 100 years, but a formal study by the Swiss Agroscope Institute for Food Sciences in 2015 traced responsibility for the holes to specks of hay that inadvertently got into the milk bucket and weakened the structure of the curd.﻿﻿ It noted that as production conditions became more sterile, the number and size of holes in Emmenthal noticeably decreased.

Swiss Cheese vs. Emmenthal vs. Gruyère

Emmenthal, Switzerland's oldest and most prestigious cheese, comes from the Emmental Valley in the west-central Bern region—the town of origin will usually be stamped on the rind. Made from unpasteurized cow's milk, it ranges in flavor from nutty to fruity to a complexity that makes it taste both subtly sweet and faintly acidic, depending on its maturity. The irregular holes range from pea-sized to the size of a walnut. It comes out of the mountains in wheels that can weigh 200 pounds.

American versions of Emmenthal use pasteurized milk or follow U.S. law and age the unpasteurized cheese at least 60 days. Some cheesemakers produce a reasonable imitation of the Swiss cheese, but the variety commonly found in U.S. grocery stores labeled as "Swiss cheese" does not have the character of a true Emmenthal. The holes also tend to be more consistent in size, and there is no rind.

Gruyère's namesake is the valley of the same name in the Fribourg region of Switzerland. Also produced with whole cow's milk, it has similar characteristics to Emmenthal, though it's generally described as slightly sweeter and more buttery. The rind is brownish gold, the center is pale yellow, and the holes are much smaller and more evenly spaced than those of Emmenthal. During the aging process, the holes may even shrink to a nearly indiscernible size. Gruyère is typically sold by the wedge from wheels that weigh up to 100 pounds.

How Swiss Cheese Is Made

The Swiss make Emmenthal and Gruyère under the strict production standards of the appellation d'origine protégée (AOP) designation. Both start with milk from free-ranging cows. In the tradition of Alpine cheeses, Emmenthal and Gruyère are often produced in the mountains in chalets designed and located for that purpose. The curds are drained and pressed into wheels, which can weigh up to 200 pounds. Emmenthal gets aged for four to 12 months, and Gruyère for five to 18 months, during which time both cheeses get lightly washed with brine to encourage the formation of a rind.

Large corporations in North America and elsewhere use mass-production operations to make Swiss-style cheese available at a reasonable price. Generally labeled with the generic "Swiss cheese" identity, it comes sliced and shredded, and in regular and low-fat varieties. Designed for quick distribution, it ages for about four months and generally has a much milder flavor than the real thing from Switzerland. Most mass-produced Swiss cheese starts with pasteurized milk, which affects the flavor.

In the United States, you can purchase imported Emmenthal and Gruyère in the true style of an Alpine Swiss cheese at grocery stores with well-stocked cheese counters or at specialty cheese shops. The much less expensive mass-produced American variation of Swiss cheese is widely available both at deli counters and prepackaged. Baby Swiss, another version of Swiss cheese developed in the United States by Swiss immigrants, more closely resembles the artisan character of the traditional Emmenthal, but cheesemakers form it into much smaller wheels, hence the moniker. Reduced aging time results in a softer, more buttery cheese with smaller holes. Most baby Swiss comes from Wisconsin, Ohio, and Pennsylvania.

You can use Emmenthal, Gruyère, and domestic Swiss cheeses pretty much interchangeably. They all melt well and share a basic flavor profile. However, the difference in flavor between the artisan-produced varieties, whether imported or domestic, and the mass-produced grocery store slices will be noticeable. You can also substitute other Alpine cheeses such as fontina and raclette.

Swiss cheese melts well, making it suitable for use in sauces. Domestic Swiss cheese often comes presliced for sandwiches. The fuller flavored Emmenthal and Gruyère cheeses are good choices for gratins and fondue. The longer-aged versions make an excellent addition to a cheese plate or can be enjoyed as a dessert cheese.

For longevity, store Swiss cheese first wrapped in parchment or wax paper, then loosely in plastic. It should stay good for up to a month in the deli drawer of your refrigerator this way. Add an outer layer of aluminum foil, and you can freeze it for up to six months. Keep in mind that freezing it may alter the texture and flavor; generally, it's best to use previously frozen cheese for cooking. You may want to grate it before freezing it for ease of use in recipes.

Swiss cheese makes a great choice whenever you need a gooey melting cheese. Shred it to incorporate it throughout a dish.

Why Does Swiss Cheese Have Holes? 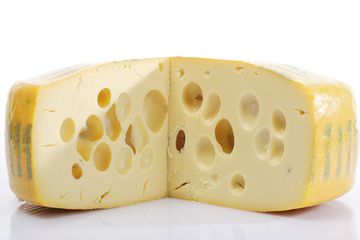 American mass-produced Swiss cheese does not develop a rind. Imported and domestic Emmenthal and Gruyère do, but they may also be wrapped in paper, cloth, or wax that you need to remove before you eat the cheese. Though you can technically eat the rind, it will generally be too tough to chew on these types of aged hard cheeses.

Types of Edible Cheese Rinds
Article Sources
The Spruce Eats uses only high-quality sources, including peer-reviewed studies, to support the facts within our articles. Read our editorial process to learn more about how we fact-check and keep our content accurate, reliable, and trustworthy.