Unsure what temperature your chicken should be so that it is safe to eat without being dry and overdone? The short answer for juicy, properly cooked chicken is 150 F for at least 3 minutes for white meat and 175 F for dark meat. Read on for more information about where these numbers come from and for tips and tricks for cooking the best chicken possible.

Watch Now: The Correct Temperature for Juicy Chicken Every Time

Last but not least, there is the chicken temperature for quality purposes—so that the breast meat is firm and white but not stringy and dry, and the dark meat is tender rather than rubbery. 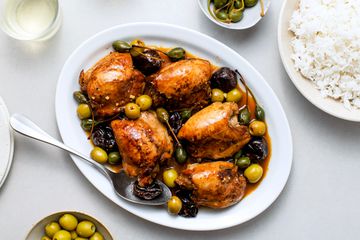 Chicken thighs and all chicken dark meat need to be cooked to a higher temperature—175 to 180 F—due to their higher amounts of connective tissue. Cooking thigh meat to 165 F will yield chewy, rubbery meat, but at 175 to 180 F, it will be tender and juicy as the collagen melts and turns to gelatin.

The following steps for roasting a whole chicken will yield white and dark meat that is tender, succulent, and properly cooked.

During the resting period, you'll see the temperature on the digital probe display continue to rise and then fall. When it completes its rise and eventually dips down to 120 F, it's ready to carve.

Because the temperature of a roasted chicken continues to rise for several minutes after taking it out of the oven, if you pull it out when the breast is 145 F and let it rest for 30 minutes, that breast meat will remain above 145 F for more than the required 8.4 minutes, making it tender, juicy, and perfectly safe. Likewise with the dark meat, which will eventually peak at around 200 F, which is more than sufficient for the collagen in the meat to break down, ensuring tender, juicy, flavorful dark meat.

Bear in mind that the times and temperatures above refer only to roasting a whole chicken. It's the overall mass of the whole chicken that allows it to hold those temperatures during the resting time. If you tried roasting an individual chicken breast, it wouldn't work the same way.

20 of Our Favorite Whole Chicken Recipes 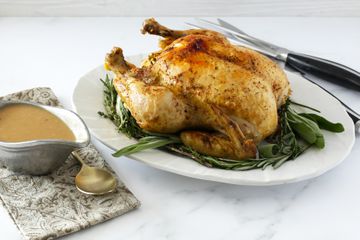 There is one technique that is perfect for cooking individual cuts of chicken to a certain temperature and holding them at that temperature.﻿﻿ It's called sous vide cooking.

With this cooking method, it's a simple matter to heat your chicken breast to 145 F for as long as you want. The added advantage of sous vide is that no matter how long you leave it in the water bath, your chicken breast will never get any hotter than 145 F (or whatever temperature you set it to). This ensures juicy, tender breast meat with minimal effort.