The History of Cheese

The production of cheese predates recorded history and was most likely discovered by accident during the transport of fresh milk in the organs of ruminants such as sheep, goats, cows, and buffalo. In the millennia before refrigeration, cheese became a way to preserve milk. Although it is unknown where cheese production was first discovered, evidence of early cheesemaking is prevalent in the Middle East, Europe, and Central Asia.

It is thought that cheese was first discovered around 8000 BC around the time when sheep were first domesticated. Rennet, the enzyme used to make cheese, is naturally present in the stomachs of ruminants. The leak-proof stomachs and other bladder-like organs of animals were often put to use to store and transport milk and other liquids. Without refrigeration, warm summer heat in combination with residual rennet in the stomach lining would have naturally curdled the milk to produce the earliest forms of cheese.

These milk curds were strained, and salt was added for extra preservation, giving birth to what we now know as "cheese." Even with the addition of salt, warm climates meant that most cheeses were eaten fresh and made daily. Early Roman texts describe how ancient Romans enjoyed cheese often. They enjoyed a wide variety of cheeses, and cheese making was already considered an art form. They provided hard cheese for the Roman legions.

The word cheese comes from the Latin word caseus, the root of which is traced back to the proto-Indo-European root kwat, meaning to ferment or become sour.

As cheesemaking spread to the cooler climates of Northern Europe, less salt was needed for preservation, which led to creamier, milder varieties of cheese. These cooler climates also saw the invention of aged, ripened, and blue cheeses. Many of the cheeses that we are familiar with today (cheddar, gouda, parmesan, camembert) were first produced in Europe during the Middle-Ages.

Mass production of cheese didn't occur until 1815 in Switzerland when the first cheese factory was built. Soon after, scientists discovered how to mass-produce rennet and industrial cheese production spread like wildfire.

Handmade artisan cheese is making a comeback in a major way. Classic cheesemaking methods are being adopted by small farmers and creameries across the United States. Specialty cheese shops, which were once dominated by imported ​artisan cheese, are now filling up with locally made and handcrafted cheeses. 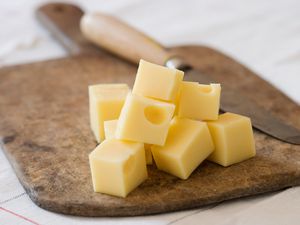 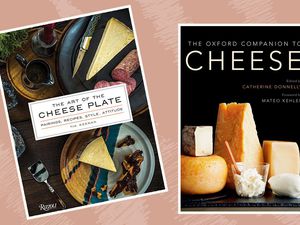