Gingerbread and the shapes it takes have a long history. An early form of gingerbread can be traced to the ancient Greeks and Egyptians who used it for ceremonial purposes. Gingerbread made an appearance in Europe when 11th-century Crusaders brought back ginger from the Middle East for the aristocrats' cooks to experiment with. As ginger and other spices became more affordable to the masses, gingerbread caught on.

And I had but one penny in the world, thou should'st have it to buy gingerbread.

An early European recipe for gingerbread consisted of ground almonds, stale breadcrumbs, rosewater, sugar and, naturally, ginger. The resultant paste was pressed into wooden molds. These carved works of art served as a sort of storyboard that told the news of the day, bearing the likeness of new kings, emperors, and queens, or religious symbols. The finished cookie might be decorated with edible gold paint (for those who could afford it) or flat white icing to bring out the details in relief.

In the 16th century, the English replaced the breadcrumbs with flour, and added eggs and sweeteners, resulting in a lighter product. The first gingerbread man is credited to Queen Elizabeth I, who knocked the socks off visiting dignitaries by presenting them with one baked in their own likeness. Gingerbread tied with a ribbon was popular at fairs and, when exchanged, became a token of love.

On a more practical note, before refrigeration was a twinkle in someone's eye, aromatic crumbled gingerbread was added to recipes to mask the odor of decaying meat.

Gingerbread is a baked sweet containing ginger and sometimes cinnamon, cloves, nutmeg, cardamom and anise, and sweetened with any combination of brown sugar, molasses, light or dark corn syrup, or honey.

Gingerbread also can be a dark, spicy cake-like Polish piernik, or an American version served, sometimes, with lemon glaze.

The third form gingerbread takes today is a house-shaped confection made with a variation of gingerbread cookie dough.

Gingerbread is considered an art form in Nuremberg, Ulm, and Pulsnitz in Germany, Torun in Poland, Tula in Russia, Pest in Hungary, Pardubice and Prague in the Czech Republic, and Lyon in France where gingerbread baking guilds were sanctioned by the government starting in the Middle Ages.

Vast antique mold collections are displayed in the Torun and Ulm museums, and some are used to make beeswax Christmas ornaments that are in great demand.

The gingerbread house became popular in Germany after the Brothers Grimm published their fairy tale collection which included "Hansel and Gretel" in the 19th century. Early German settlers brought this lebkuchenhaeusle (gingerbread house) tradition to the Americas.

Gingerbread houses never caught on in Britain as they did in North America, where some extraordinary examples can be found. But they do exist in other parts of Europe.

In December 2001, bakers in Torun, Poland, attempted to beat the Guinness Book of World Records for the largest-ever gingerbread house. It was made in Szczecin, Poland, with 4,000 loaves of brick-shaped gingerbread measuring 11 1/2 feet high. It took a week to create and used 6,000 eggs, a ton of flour, and 550 pounds of shortening. Alas, they lost to an American team. 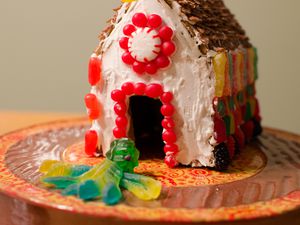 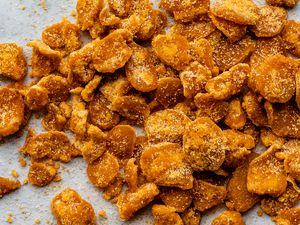 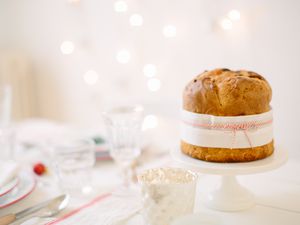 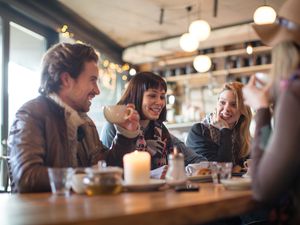