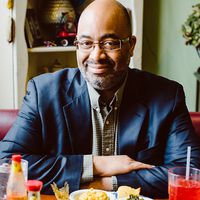 Sean Sherman, also known as “The Sioux Chef,” is a global leader and champion of Indigenous culinary ingredients, techniques, and traditions. His impoverished childhood on a reservation was marked by a mix of beloved foods that evoked his Lakota heritage and government-provided commodity foods that simultaneously symbolized a heritage forcibly lost because of colonialism. As a result, he began working in restaurants at an early age. Chef Sherman’s perseverance allowed him to catapult from lowly restaurant jobs as a teen, become a head chef by age 26, and then achieve many of the restaurant industry’s highest accolades in his 40s. 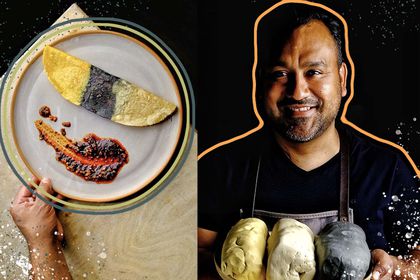 In July 2021, Chef Sherman opened Owamni, a restaurant in Minneapolis, Minnesota that specializes in, and celebrates, Indigenous cuisine. In June 2022, Owamni won the James Beard Foundation Award for “Best New Restaurant.” I recently had the opportunity to  talk with Chef Sherman about the historic win and how people can learn more about native foods.

This Interview has been edited for length and clarity.

Tell us about your journey to Owamni.

I grew up on the Pine Ridge reservation in South Dakota and I’m enrolled with the Oglala Lakota Sioux tribe. Both my parents were born and raised on the reservations. My mom moved off the rez when I was young and we lived in a mostly white town in the northern Black Hills (on the Wyoming border). Like a lot of families on the reservation, we didn’t have a lot of money, so I started working at a relatively young age. I started working in restaurants when I barely turned 13, and I just worked in restaurants through high school and college.

I moved to Minneapolis and continued to work in restaurants, and I moved into a chef position at a relatively young age . . . I think I was around 26 years of age. I had a pretty good chef career from the start—I got lots of good reviews from local papers, and I worked in a lot of different cuisines. A few years into that role I just realized the complete absence of Indigenous acknowledgement in the culinary world. There were no restaurants, there were barely any books on the subject, and most of the books that were out there were heavily infused with European ingredients. I really wanted to understand for myself what my Lakota ancestors were eating, harvesting, and gathering, and their knowledge of food systems in general. It just became a question of how do we identify Indigenous foods in today’s world and what are modern Indigenous foods going forward? Those questions lead to what we have withOwamni and our non-profit Indigenous kitchen food lab, also in Minneapolis right now.

What is the food lab?

Growing up on the reservation, we had a lot of family gatherings, of course, because there were a lot of large families, so I just remember a lot of those celebrations. We grew up hunting, we grew up harvesting things like chokecherries and a wild turnip that grew on the Great Plains that we called timpsila. I remember my grandmother always cooking at those big events. We had some traditional dishes, one was called taniga which is a kind of intestines soup, we had fry bread, we had a berry sauce made from chokecherries that we call wojapi that we still use in today’s restaurant. There are a lot of good food memories, but a lot of the food I grew up with was commodity program food. We grew up poor, so a lot of our pantry was lined with government commodity foods.

What went through your mind at the James Beard Awards ceremony when Owamni’s name was called?

I didn’t think we would win that. I was up for two nominations this last year, and I thought we had a better chance at the regional award for Best Chef: Midwest. We’re not the fanciest. We’re not after Michelin stars. Typically, and historically, those kinds of national awards go to the European chefs making European-style food. So, it was a huge surprise to be able to take that honor and take that award home. It feels a little surreal. I feel really good that we’re doing something so intentional and so different.

What does Owamni mean?

Our restaurant overlooks a site that used to be a large Dakota village in what is downtown Minneapolis now. There was a big waterfall on the river that the Dakota people called Owamni Yomni which meant “Place of the Falling, Swirling Water.” When we named the restaurant, we took the short name Owamni which signifies the area around the waterfalls.

Today, those waterfalls are gone because it’s just concrete skirting. All of the colonial history of that area destroyed that natural feature . . . an amazing waterfall that at one point was 300 feet across and 40 feet down. It’s just a really sacred spot and a really old spot. For the Dakota people, the name for the Mississippi River, in their language, it's called Haha Wakpa which means “River of the Falls” signifying that one spot because that was the only waterfall on the entire Mississippi.

We only have healthy food on our menu, and we’re able to take a space and a platform for that kind of award is pretty big. Half the menu is completely plant-based, and we removed colonial ingredients . . . things that were introduced here like wheat flour, dairy products, cane sugar, beef, pork, chicken. We focus on wild foods, native heirloom agricultural products, diverse varietals of corn, beans, squash, flowers, things like that and tons of wild game and fish that really represent regions. We’ve been able to showcase something really different.

What’s your favorite item on the Owamni menu?

The game tartare has always been one of my favorites. It’s something different, something so clean, and it changes depending on what’s available. So, we’ve had antelope tartare, elk tartare, bison tartare. We’re utilizing a lot of wild berries and wild flavors. It’s something completely unique compared to the tartares you might find anywhere else.

What can people do to explore and learn more about native foods?

People should just really think about the land that they’re standing on and the privileges that are still out there with so much people holding so much land space still of that area. Think about the Indigenous communities of that region, the struggles, and the intense violence that they had to go through . . . for the sake of taking over those spaces, commodifying it, and making families very rich. And a lot of families still reap from that privilege. People should also realize the importance of Indigenous knowledge and having the blueprint to live sustainably primarily with the world around you. That’s why it’s so important to protect natural resources.

What do you hope Native American Heritage Month accomplishes? 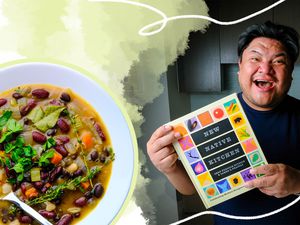