In Northern Ireland, brown soda bread is made with whole wheat flour and known as wheaten bread; in the Ireland, soda bread tends to be made with all-purpose flour. You may also know this as brown bread which in Ireland typically refers to the same thing as wheaten bread in the North. Sometimes you'll find recipes with a combination of whole wheat (also referred to as wholemeal) flour and all-purpose flour.

Nevertheless, soda bread is a quick bread that gets its name because it's leavened with baking soda instead of yeas. Traditionally it would be baked on a hot cast-iron griddle over an open peat fire. The griddled bread would be cooked into a round with an indentation marking the quarters; each quarter is called a farl. Today, the bread is baked in the oven with consistent results.

While some recipes for wheaten bread include a couple of teaspoons of sugar and tablespoons of butter, which makes it sweeter and a little richer, this recipe keeps it as simple as possible. When using baking soda, a recipe must include an acidic element for the soda to release gas and allow the bread to rise. In this recipe, buttermilk provides the acidity. You can't substitute regular milk as it isn't acidic enough; the bread won't rise.

This is a hearty, nutty bread that's enjoyed sliced with butter, or make a ploughman's lunch by serving the soda bread on a platter with cheese, fruit, and slices of cured meat. Soda bread is also perfect for afternoon tea.

Run Out of Buttermilk? Here Are Substitutes You Can Do in a Flash 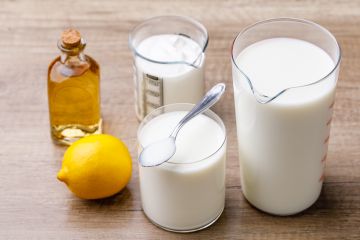 To make vegan soda bread, you can substitute nondairy milk, but you need to include an acid such as lemon juice to activate the baking soda. For this recipe, mix 1 3/4 cup nut milk with 1/2 cup of lemon juice. Allow it to sit for 15 minutes before adding it to the recipe in place of the buttermilk.

How to Store Irish Wheaten Bread

Irish brown soda bread will keep for 2 to 3 days, but it has to be well-wrapped in foil. It takes well to toasting on the second and third day after you bake it. However, it's so easy to make and requires no rise time that it's easy to understand why it's customary to make this bread daily.

Irish wheaten bread also freezes well. Wrap any leftovers up tightly, store it in a zip-close freezer bag, and reheat in a low oven until warmed all the way through. (This will depend on how large your loaf is.)