Chamomile (or camomile) is a flowering herb. It looks like a tiny daisy, with a yellow central disc surrounded by delicate white petals. Chamomile is more fragrant than similar flowers, giving off a gentle floral, almost applelike aroma that is very relaxing. For this reason, and due to its many reported health benefits, chamomile is popular in herbal teas and aromatherapy.

A member of the Asteraceae family, chamomile is closely related to echinacea, sunflowers, marigolds, and other daisylike flowers. The name comes from the Greek word chamaimēlon, meaning "ground apple." The flowering herb has been used as a medicinal tonic and topical remedy for thousands of years. Though its use likely predates the period, it is known to have been drunk by Ancient Egyptians. Chamomile was also used as both a beverage and incense by the Romans.

There are two main types of chamomile: Anthemis nobilis (Roman chamomile) and Matricaria chamomilla (German or wild chamomile). The Roman variety was named by a botanist in the 19th century who found it growing near the Colosseum in Rome. German chamomile tends to have a more robust, almost pungent scent, while Roman chamomile is sweeter and fruitier.

The chamomile plant's flowers and buds are harvested for tea as the flowers open. It continually blooms for a few months, depending on the climate in which it's grown. Egypt and Eastern Europe lead chamomile cultivation, though it's grown worldwide, and German chamomile often grows wild. After harvest, the flowers are dried to prolong the shelf life. When this occurs, the white petals turn a pale yellow and may fall off the yellow head, which is its most recognizable form.

Chamomile is best known for its flowers, particularly the yellow heads. These can be used fresh or dried for various culinary and medicinal purposes. They may also be used in a floral extract or tincture.

Perhaps the most widespread use of chamomile is as a tisane. It is often enjoyed on its own as an herbal tea or used in blends and enjoyed for its soothing qualities.

Chamomile is also used in other beverages, such as liquor infusions, a beer additive, and to make wine. It's commonly used in Spain to flavor Manzanilla sherry and is found in Greek cuisine as well. The floral flavor can be infused into syrups and used in ice cream, other desserts, or savory dishes such as soups.

Due to its aroma and healing aspects, it's also quite common to find chamomile in topical lotions, oils, soaps, shampoos, and cosmetics. Many of these products use chamomile essential oil, which should never be ingested or applied directly to the skin on its own. The oil may also be used in aromatherapy applications, including diffusers and candles.

How to Drink Chamomile Tea

Chamomile tea is an excellent choice when you need to unwind from your day, relieve stress, or are preparing for bed. It is also one of the most popular teas for afternoon tea because of its lovely floral flavor.

Generally, when using chamomile to make tea, use between 1 and 4 tablespoons of fresh or dried flowers for each cup of water. The recommended water temperature is 200 degrees Fahrenheit or near boiling. Steep the herb for 3 to 5 minutes, depending on your taste. It's also best to follow the manufacturer's recommendations for any prepared chamomile tea. Adding a little honey or a similar sweetener and a splash of lemon juice can give the drink a nice flavor boost.

Whole, dried chamomile flowers can be purchased at natural food stores, tea shops, and online. Packages may include just a few ounces or up to a pound. Larger bulk quantities are available, though the flowers do not weigh much: One pound should fill a one-gallon jar. The price is generally comparable to other dried herbal products, neither expensive nor cheap. Chamomile tea bags are very common and available at grocery stores.

Fresh chamomile is dried for long-term storage. Spread the flowers out and place in a dry, cool spot out of the sun for up to a week. They can also be dried in a food dehydrator or oven. Once dry, store chamomile in an airtight container out of direct sunlight and away from heat and humidity. It will retain its flavor for up to a year.

Chamomile is an excellent choice for a home herb garden. If you're thinking about using it in teas, consider growing German chamomile. It is an annual plant that often self-seeds, whereas Roman chamomile is a perennial most commonly used as a ground cover. If you enjoy gardening, you'll also be glad to know that chamomile can prevent seedlings from damping off.

The soft floral flavor and relaxing properties of chamomile tea make it a favorite ingredient in a variety of drink recipes. It can also be served as an iced tea, either on its own or mixed with lemonade, clear soda, or sparkling water.

Learn How to Make Your Own Herb Tea Blends 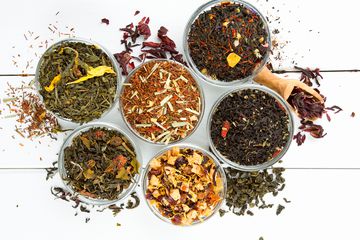