Vasilopita, literally translated to "Basil's pie," is a Greek sweet bread traditionally eaten on New Year's Day in Greece. The bread dates back to ancient civilizations and is baked in honor of Saint Basil the Great who is celebrated on January 1. The bread contains a foil-wrapped coin baked into it—similar to Mardi Gras King's Cake which has a plastic figurine baked into it. On New Year's Day, the bread is cut and served, starting with the eldest member of the family, so that each member of the household gets his or her own piece. Legend has it that whoever's piece contains the hidden coin will have a year filled with good luck.

Vasilopita also comes in a cake version which has a much sweeter flavor, cake-like texture, and is usually flavored with orange, and sometimes a sweet liquor such as brandy. Vasilopita bread and cake are often decorated with elaborate designs or the number of the year it is celebrated. This version is simply topped with sesame seeds and is the perfect accompaniment to morning or afternoon coffee or tea once sliced and served.

56 Bread Recipes Every Baker Should Master 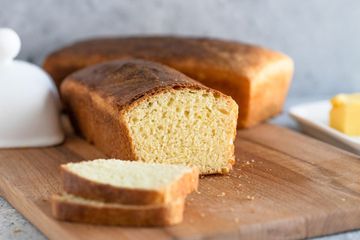 How to Make Your Own Irish Wheaten Bread (Brown Soda Bread)