Vietnam is a country with a strong coffee tradition. Vietnam harvests large amounts of coffee year after year, with the vast majority of their crop consisting of robusta beans. Robusta is often considered to be lower quality, while Arabica is grown at higher altitudes with a more delicate flavor. But a few objective facts help explain robusta’s enduring appeal around the world. Robusta beans are easier to grow and the plants produce a higher yield, resulting in prices that are often much, much lower than Arabica's. Yet despite costing less, robusta can contain almost double the caffeine, giving drinkers the morning jolt they crave.

Coffee is a powerful ritual. Rituals, by definition, have deep roots. When Vietnam’s coffee industry was developing in the wake of French colonization, the dairy industry was similarly nascent and fresh milk was a little hard to come by. A high sugar content preserves sweetened condensed milk, making it easier to store and transport. The intensity of the robusta bean, combined with the logistics of pre-industrial dairy farming and the human love for sugar, helped to create a specific coffee culture that still endures today.

In Vietnam, the world’s second-largest coffee-producing country, drinking sharply bitter and strong robusta coffee with condensed milk (called ca phe sua da) remains as popular as ever. In fact, many homegrown Vietnamese chains are expanding rapidly, exporting Vietnamese coffee culture to other parts of Asia and into the west as well. 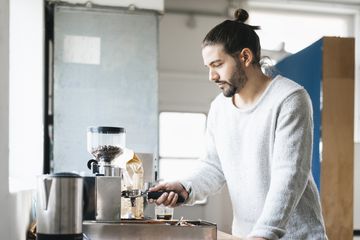