Mention to someone that a vinegar pie is on your list of desserts to make, most people will make a face and ask why—probably because common sense tells us that vinegar does not belong in a dessert. This vinegar pie will change minds. The flavor is a delicate balance of sweet and tart with a buttery crust and custardy interior. The acidic qualities of vinegar provide the perfect citrus substitute for apples or lemons. If you didn’t know vinegar was a flavoring agent in the pie, you would never guess it.

Vinegar pie—along with buttermilk pie, chess pie, and green tomato pie—were known as “desperation” pies because they were made from a few inexpensive ingredients. That's exactly why vinegar pie was popular during the Great Depression, but it was also the idea of making something wonderful from nothing. Currently, trendy restaurants have found “desperation” pies are rising in popularity and well-accepted by the dining public. It’s not only because of renewed interest in homegrown heritage cooking but simply the fact that desperation pies taste so good. Chefs have reported going back to their grandmothers’ cookbooks to find old comfort food recipes.

Apple cider vinegar is also believed to have health benefits. Vinegar is used as a food preservative and can inhibit bacteria growth. It has shown promise in improving insulin sensitivity, lowering blood sugar after meals, and in reducing triglycerides and cholesterol. Bring on the vinegar pie and celebrate an American culinary tradition! 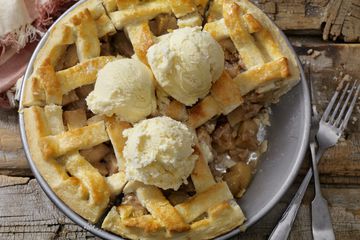 62 Delicious Pies to Bake Any Time of Year