The Vitamix Food Processor Attachment is more than just an accessory product—it's a real food processor in every important way.

Buy on Amazon Buy on Williams-Sonoma
4.9

We purchased the Vitamix Food Processor Attachment so our reviewer could put it to the test in her kitchen. Keep reading for our full product review.

Whether you're looking to dice up raw fruits and veggies, grate cheese, or even knead bread, a food processor is a versatile tool that will help you achieve all your prepping and cooking needs. However, an extra appliance on your kitchen countertops may not be ideal. That's precisely why I decided to test out the Vitamix Food Processor Attachment.

I've used plenty of food processors over the years, so I knew what I wanted to test when the Vitamix Food Processor Attachment arrived. I had hard cheese to chop, firm cheese to shred, and plenty of vegetables to slice, dice, and grate. Keep reading for the full rundown.

Most food processors have a shaft that rises up in the center of the motor that powers the chopping and shredding. Since a Vitamix blender base doesn’t have that shaft, the first part of the food processor assembly is the self-detect base with a tall shaft.

Right off the bat, I loved that it was totally obvious how all the pieces fit together, and since the blender base recognizes the food processor, it also recognizes when it’s not correct. A few times the lid wasn’t snapped on properly, and the processing wouldn’t start. A push was all that was required to snap the lid on, but it’s good to know the processor is safe from accidental starts.

Like Vitamix blender jar lids, the food processor lid snaps tightly onto the bowl using tabs on two sides. There are a larger feed tube and a smaller round one, like most standard food processors, with matching pushers. The bowl has a pouring spout and a handle that was easy to hold, no matter if I was using the spout or scraping food out of the side of the bowl.

One metal chopping blade and two reversible disks are included, along with a storage case for the blades. One disk is for fine shredding and thin slicing, and the second disk is for coarse shredding and thicker slicing. For safe handling. there are two finger holes in the disks. I appreciated the ease that gave me when placing or removing the disks, particularly when they were messy from shredding vegetables.

My first test of this food processor’s capability was kneading bread dough. I have actually used the Vitamix blender jar to make dough, but a food processor bowl makes more sense for that task. In no time, the mixture turned into a silky dough that I used for a tasty loaf of bread.

I also used the blade for finely chopping a selection of hard cheeses including parmesan. The bowl was about 3/4 full and it was quite noisy as the hunks started flying around. I turned the speed up as the hunks turned to bits and kept going until I had fine crumbs. Next, I filled the bowl with tomatillos and onion to chop for green salsa. I pulsed quickly to chop the vegetables roughly, then pulsed for slightly longer bursts to get an even texture.

In short, this bowl does everything a full-size, powerful food processor can do. Because it is one.

When I used the shredding and slicing disks, I never needed to go faster than speed one. My first try was the coarse shredding disk and 1/2 pound of cheddar. It was so fast I considered shredding all the cheese I owned just for amusement, but decided it was such an easy process I could shred cheese as I needed it.

A head of cabbage met its fate to make cole slaw, and I appreciated the larger feed tube. Of course, I still had to cut the cabbage, but at least I didn’t have to fit the smaller tube.

My favorite way to make pie dough is in a food processor, so that was next. In just a few pulses, I had perfect bits of butter distributed in the flour. The process was so fast, the butter didn’t even have a chance to think about getting soft.

In short, this bowl does everything a full-size, powerful food processor can do. Because it is one.

I tried the thin and thick slicing blades on onions, zucchini, and cucumber. Each time, a single vegetable was gone at about the same time that the timer ticked up to 1 second. My knife skills are decent, but the food processor was much faster and the slices were all the same thickness.

I tried the thin and thick slicing blades on onions, zucchini, and cucumber. Each time, a single vegetable was gone at about the same time that the timer ticked up to 1 second.

One thing I thought I'd miss with this food processor was the additional small bowl that many models include. I decided to test its ability to handle a small amount with a cup of peanuts. It didn’t take long before they were chopped, but I kept the blades spinning to see if I could make peanut butter. As the peanuts began to turn into a paste, it started clinging to the outer corners of the bowl. The blades were still working through the paste, so I kept processing, stopping a few times to check the progress. I ended up with a little bit of peanut butter, but while it’s good to know I can process small amounts, there’s another option. Vitamix sells small cups for this blender that I'd likely use for chopping a few herbs, garlic, or nuts.

This food processor bowl relies on the Vitamix base for its programs and power. The pulse and on/off buttons work as expected, but the only automatic program that works is the self-cleaning option. It makes sense. I'm going to be making smoothies and soup in the blender jar, and the food processor doesn’t need access to those.

Compatibility: Not for all models

The one downside of this food processor attachment is that it only works with Ascent or Venturist series Vitamix blenders, so owners of other models can’t use it. It's understandable, though. The self-detect feature means the food processor won’t start if it’s not assembled correctly. Without that feature, it would be possible to run the processor with the lid off, which would be a major safety hazard.

Storage: Not as tall, still a little wide

One of the benefits of this bowl is that there’s no need for another heavy motor to lug in and out of storage. Since the bowl itself is the size of many standard food processor bowls, it still takes a bit of shelf space, but storage was certainly considered when this was designed. With the metal blade in the bowl, the lid assembly is placed on top of the bowl, upside down. Then the case that holds the blades snaps onto the lid for more compact storage that’s not nearly as tall as a standard food processor, and with all the parts neatly together.

While food processors are speedy, one of the complaints is the need to clean all the parts after a little bit of use. While the food processor can be used with the Vitamix’s cleaning function, I didn’t feel that was necessary unless the food was sticky or goopy. Even better, all the parts (except the self-detect base) are dishwasher safe, so if the processor isn’t immediately moving on to another task, the dishwasher can do the work.

Considering this is just a food processor bowl attachment with no motor, it’s a bit expensive (it retails around $200). However, a Vitamix has a powerful motor, and it can handle food processing tasks with ease, so I don’t mind giving it more work to do.

Retailing at around $130, the Oster Pro 1200 Blender and Food Processor (view at Amazon) is both a blender and food processor. The downside is that the food processor bowl is only 5 cups, so it won’t be able to handle tasks of a full-size food processor. While the Oster price is attractive, I still prefer the Vitamix attachment I tested for anyone who already has a Vitamix blender or who is considering buying one.

A compact attachment that mimics a full food processor.

If you own a Vitamix blender and are in need of a food processor, look no further than the Vitamix Food Processor Attachment because, in addition to being a space-saver, it fully functions just like the real thing. 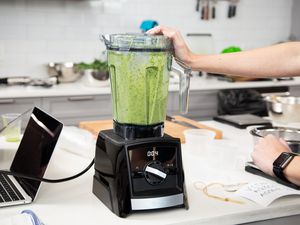 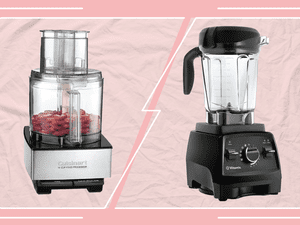 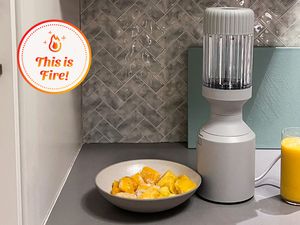 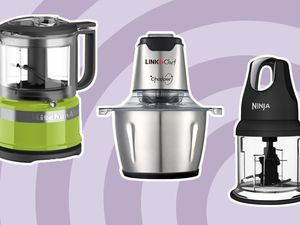 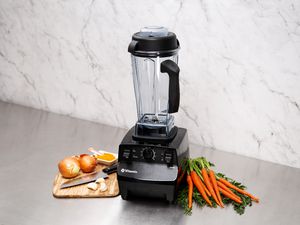 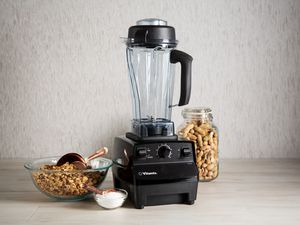 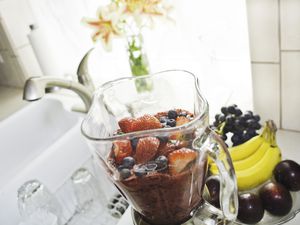 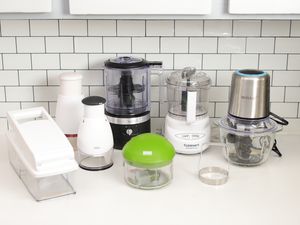