A Guide to Buying, Cooking, and Storing Fava Beans

Fava beans, also known as broad beans, are a springtime crop that is grown and eaten around the world. One of the oldest known cultivated plants, fava beans date back to about 6000 BCE and were eaten by the ancient Greeks, Romans, and settlers of the eastern Mediterranean. Today, fava beans are part of Asian, Middle Eastern, European, South American, and African cuisines. Fresh favas can be eaten raw, cooked, or dried for use later, and the versatile bean can be used for salads, stews, sauces, fillings, snacks, and more.

Fava beans grow in big, bumpy green pods on an easy-to-grow flowering pea plant that is harvested in the spring. Inside the cushy pods are large, flat, bright green beans with a tough, clear skin that is typically removed before eating. The labor-intensive process of preparing fava beans may have attributed to the legume's slow rise to popularity in America, a country full of bean options. Sought out by chefs and veggie lovers, fava beans are more expensive than your average fresh or dried bean. 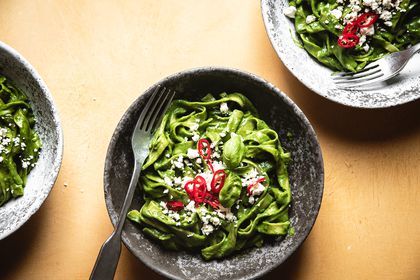 How to Cook With Fava Beans

Small, young pods can sometimes be eaten whole, but beans are typically removed from the pod. Beans are shelled by snapping the stem end off of the pod and pulling the attached string. Pop out the beans and repeat with the remaining pods. Fresh, shelled fava beans are often blanched to make removing the tough clear skin easier. To peel the blanched beans, use your thumb to pop open the top of the skin at the bean's dimple and remove. Once the prep work is out of the way, the beans can be used as is or cooked further, depending on the recipe. Fava beans can be eaten raw, boiled, steamed, stewed, mashed, sautéed, fried, or roasted.

Dried fava beans are prepared much like other dried beans and should be soaked before cooking low and slow in plenty of water.

Fava beans have a delicate, buttery and nutty taste with a trace of light bitterness. Many fava fans describe the bean as tasting like spring, with a lightly sweet vegetal flavor. Dried fava beans have a mild flavor similar to dried chickpeas.

Since fava beans are eaten around the world, there are a multitude of recipes available for using the springtime crop. Narrow your choices down by fresh or dried bean recipes, since they will differ greatly in preparation and flavor. Dried beans are often used to make soups, stews, pastes, and falafel. Fresh beans are sautéed, boiled, steamed, roasted, or fried. They can also be added raw to salads or pestos, or lightly cooked and tossed with other springtime vegetables like artichokes and asparagus. Dried or fresh, you can use fava beans to make a dizzying variety of dishes.

Where to Buy Fava Beans

Fresh fava beans will appear in grocery stores in the springtime, typically still in their long pods. They have a short season, so keep a close watch at farmers' markets for locally grown beans. Choose pods that are bright green and full all the way to the ends. If you'd like to cook the entire pods, buy very fresh, small, thin pods early in the season and use right away. Larger pods tend to hold larger beans and will need to be shelled, blanched, and peeled before eating. Note that if you are shelling your fava beans (the most common preparation for fresh beans) that the pods make up the bulk of the weight. You'll need to buy more than you think—one pound of pods can equal a mere one cup of shelled beans.

Dried beans can be found year-round at Middle Eastern and Greek markets, and frozen beans can sometimes be found in the frozen aisle at grocery stores.

Fava or broad beans are an annual plant that can also be grown at home. They require a 75- to 80-day growing season and should be picked when the pods feel full.

How to Store Fava Beans 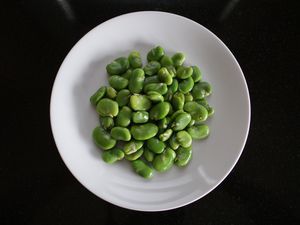 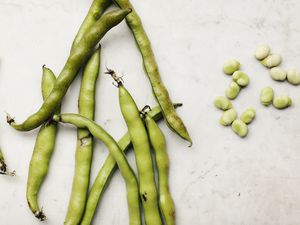 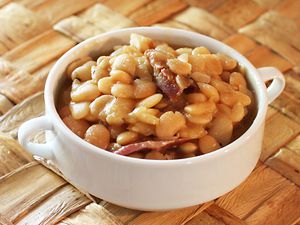 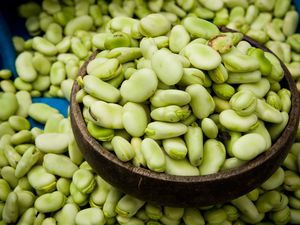