What Are Garlic Chives?

A Guide to Buying, Cooking, and Storing Garlic Chives

Garlic chives are graceful herbs with pretty white flowers. The combination of a chive-like appearance and strong garlic flavor makes garlic chives a popular seasoning. Chopped fresh garlic chives are found in recipes for Chinese dishes including stir-fries, and they are used in Japanese cuisine as well.

What Are Garlic Chives?

With their white flowers, long green shoots, and lack of a bulb, garlic chives (Allium tuberosum) bear a strong resemblance to regular chives. That's not surprising since both are members of the onion family. However, while the standard chive has a mild flavor similar to onions, Chinese garlic chives are known for their strong “garlicky” flavor. Besides finding them in the supermarket, you can grow garlic chives in your garden or a container herb garden.

The Chinese have been growing and cooking with garlic chives for at least 3,000 years, dating back to the Chou dynasty (1027 BC to 256 BC). But the popularity of this herb extends beyond China. Japanese cooks call garlic chives nira and use them frequently in meat and seafood recipes.

There are three types of garlic chives, each with different uses:

Standard garlic chives (gau choy): Garlic chives look similar to chives, but their leaves are broad and flat instead of hollow. Their garlicky flavor enhances cooked dishes, particularly ones where the food is slowly simmered in a sauce, such as red-cooked stews or soups, or in stuffing. Use them also to add flavor to stir-fries. They go particularly well with eggs and seafood—you’ll often find them paired with scrambled eggs or prawns.

Flowering Chives (gau choy fa): Flowering chives have hollow, light green stems and yellow buds on the end. But don’t let their delicate appearance fool you: flowering chives have a stronger garlicky flavor than gau choy. A popular delicacy in Chinese cuisine, they are used in salads and stir-fried alone. The yellow buds make an attractive garnish and, unlike regular chives, they are edible. Their popularity means that flowering chives are often easier to find than garlic chives, both in regular supermarkets and Asian groceries. Feel free to use them in place of garlic chives.

Yellow Chives (gau wong): Yellow chives are garlic chives that have been grown under cover, without any exposure to direct sunlight. This prevents the leaves from turning green, as the plant’s chlorophyll-absorbing molecules never kick into action.

Yellow chives have thick flat leaves, a yellow color, and a mild, onion-like flavor. Like flowering chives, they are considered to be a delicacy, and often served alone or paired with another vegetable in a stir-fry. Use them in soups, with noodles, or whenever you want to add chives with a milder flavor than either garlic or flowering chives.

Chinese garlic chives have a strong, pungent “garlicky” flavor. They’re a great substitute for garlic when you don’t feel like smashing and peeling cloves.

Trim off the ends of garlic chives (if they are not already trimmed) and wash thoroughly before using. Chop the chives to release the flavor. For best results, add the chives near the end of the cooking process—otherwise, the flavor fades.

Chopped fresh garlic chives are often used to give a bit of extra flavor to a noodle stir-fry. You’ll find chopped garlic chives showing up in Chinese recipes for soups, stews, salads and meat marinades. Garlic chives make a flavourful alternative to regular chives in non-Asian dishes. Feel free to add a few snips of garlic chives the next time you’re preparing scrambled eggs or an omelet, or substitute them for regular chives in a recipe for herbed bread.

Where to Buy Garlic Chives

Garlic chives are sold fresh. You can find garlic chives in the produce section of a well-stocked supermarket or at an international specialty grocer. When purchasing regular garlic chives, look for dark green leaves with no sign of wilting. Flowering chives usually come packaged, with the ends already trimmed. Look for a bright green color and fat yellow buds.

Fresh garlic chives have a short lifespan. Remove any dark green leaves that have wilted before cooking. Both regular garlic chives and flowering chives will last for a few days stored in the crisper section of the refrigerator. Fresh yellow chives, on the other hand, should be used within the same day. 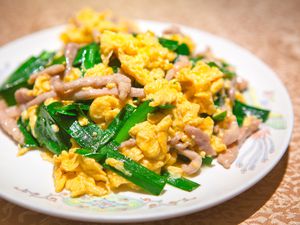 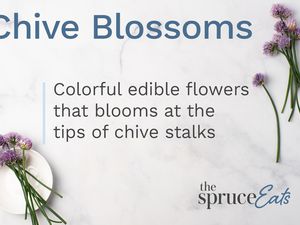