The delicate-looking and slightly bitter Belgian endive, which indeed originates in the country of its namesake, shows up a lot in salads, especially French-inspired ones. Although chefs love it, dismissing it as merely a fancy salad green discounts the fact that it also shines when baked, grilled, braised, or eaten raw in a crudités platter. It's really that versatile.

Belgian endive is a small, cylindrical head of lettuce (about 6 inches in length) with pale yellow leaves that are tightly packed and feature slightly curly edges. It is moderately bitter and grown just beneath the soil in dark rooms, much like mushrooms, to keep it light in color and preserve its delicate flavor.

It's a rather elegant green, and given its import status and labor-intensive harvesting methods, it isn't cheap either. But if you really want to serve something different with your roasted chicken or fish, it makes for a surprisingly good side dish, adding a bit of complexity to a meal.

How to Cook With Belgian Endive

Belgian endive is very easy to clean and prepare. Simply remove a few of the exterior leaves, cut off the stem, and proceed as your recipe preparation directs. Chopped, it can be used in salads, or it can be braised whole or baked as a side dish. The leaves can be separated and used as the edible dish for small appetizers or used as dippers. The compact heads of endive can be brushed with a vinaigrette and grilled, a good accompaniment for grilled fish.

There's another variety known as red endive, or radicchio, which is round and has deep red or variegated leaves that make it a favorite in salads to add color and flavor. Radicchio is also excellent roasted (add it to a pasta dish, for example) or sautéed. It can work in raw salads like a slaw, too, because it's sturdy and its bitter undertone adds a surprise.

Belgian endive can be a bit of an acquired taste, but any given bitter green, for example, can work as a counterpoint to other sweet and sour flavors that may be present in a dish. Belgian endive offers a crisp texture, a refined, almost fancy look, and a slightly bitter taste experience. Cooking will transform its flavors, softening and mellowing them.

Yes, Belgian endive is totally great for the kinds of salads that require poached eggs and bacon, but try it in a creamy soup or a citrus-accented salad. Braise it, bake it, or roast it. Then get out your favorite olive oil and/or balsamic vinegar, sprinkle with salt and pepper, and you've got a quick-cooking side dish that won't bore. It's hard to go wrong.

Where to Buy Belgian Endive

You can find this endive sold on its own, whole and not bagged, and it's relatively easy to spot because of its distinct color, shape, and texture.

Its typical season, like all chicories, is fall and winter, so you may encounter it at markets during cooler weather. Endive is usually available all year round in grocery stores, and sometimes, radicchio pops up in a prepackaged salad greens mix.

Look for leaves that are crisp, tight, and white to pale yellow in color. You don't want a head that's wilty, with leaves falling off or browning around the edges.

Belgian endive is rather delicate looking, but don't let that fool you. If stored unwashed in the refrigerator's vegetable drawer, it should keep for at least a week. Red endive, or radicchio, keeps a little longer.

Endive, in general, is both a little confusing and a little complicated. It doesn't refer to just one type of green but to the leafy part of any of the bitter-flavored plants in the chicory family.

For cooking, the other two main types are curly endive (frisée) and broad-leafed endive (escarole). Frisée is an unmistakably bushy head of curly greens with lacy leaves. It looks a tad unruly on the plate, like a tangled mane, which adds an unusual visual contrast to the foods with which it's paired.

Frisée is slightly bitter and often used in salads for both texture and flavor, but it can also be sautéed. To further muddy the conversation, in the U.K., frisée is simply called endive.

Broad-leafed endive is in the same genus and species as curly endive but is a different variant; it is sometimes called escarole. The leaves are longer and larger than the others, with wavy edges. Clean it as you would any other head of lettuce, whether you are going to eat it raw or cook with it, which makes it easy and familiar to prep.

Because it's less bitter than the other two varieties, and it resembles a head of lettuce, albeit an edgy one, the inner, lighter-colored leaves can easily be used in salads. (Escarole tends to pair well with assertive cheeses, like blues.) The outer, darker leaves are more bitter and not as tender, but chop them up for soup and cooked dishes. 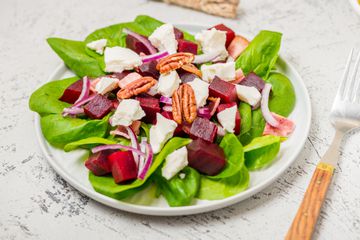