Cassava is a tuber with brown, fibrous skin, a snowy white interior flesh, and is about 2 inches wide and up to 12 inches long. Other names for cassava are yuca (pronounced YOO-ka), manioc, mandioca, and casaba. While sometimes mistakenly spelled yucca, the yucca is a separate, ornamental plant.

Cassava is native to South America and some parts of the Caribbean and has long been an essential root vegetable in these countries; it's a food staple for millions. Cassava must be peeled before being used and can vary in price, ranging from six to 10 times more than russet potatoes. The tapioca starch we know as a thickener and the pearls used in drinks such as bubble tea and desserts are a byproduct of cassava.

How to Cook Cassava

Cassava, also known as yuca, must be cooked before it's eaten, as it is poisonous in its raw form. Before cooking cassava, it must be peeled, as the skin not only contains high concentrations of hydrocyanic acid, but is also bitter tasting and fibrous. Since the outside is more like bark than the skin of a potato, it is best to use a paring knife instead of a vegetable peeler. Cut off both ends of the cassava, then slice it into about four pieces.

Stand up a piece on a cutting board (so the cut-side is down), and using a paring knife, remove the skin, cutting from the top of the piece to the bottom, trying not to take off too much of the white flesh. (This technique is similar to cutting a pineapple.) Rotate the piece, continuing to slice off the bark. Quarter each piece and remove the woody core as you would in a pineapple.

Cassava is incredibly versatile and is used both for its meat as well as its juice. It can be boiled, baked, steamed, grilled, fried, mashed, made into chips, or added to stews. Most often it is mashed, sprinkled with salt, pepper, and lime juice, and served as a side with meat. It can be used to make dough for empanadas and tamales as well as tapioca, which thickens puddings. Cassareep, an essential ingredient in Guyanese pepperpot, is a concoction of boiled down cassava juice combined with other spices.

In Jamaica, bam-bam is the collective term used for food made from cassava such as bread, pancakes, and muffins. Bammy, or bammie, is thick bread made from cassava flour. It’s usually eaten with fried fish or saltfish and ackee. Dominicans make a savory yuca turnover called cativias.

Cassava root has a subtle taste that is earthy, slightly sweet, and nutty, with a touch of bitterness. Because it is mild, it benefits from being cooked with strong-flavored ingredients.

Sweet cassava can be treated similarly to potatoes. Grated bitter yuca is used to make casabe, which is a traditional crisp, unleavened flatbread popular in the Dominican Republic. Cassava flour, which is also sometimes referred to as manioc flour, can be used in gluten-free baking and cooking.

Depending on where you live, you may be able to find cassava root in the produce section of your local grocery store. Otherwise, it can be found in Latin and Caribbean markets. Cassava is also sold frozen and in flour and meal form.

Because it bruises easily, it’s often sold covered in a protective wax coating. When buying cassava roots, look for firm roots with no soft spots. Also, if possible, buy whole roots that have not had their ends removed. If the cassava is cut, make sure the flesh is a snowy white without any black discoloration. It should smell fresh and clean.

Unpeeled cassava should be stored in a cool, dry place such as the pantry. Once the cassava is peeled, it will last up to a month in the refrigerator if covered with water, with the water changed every two days. It can also be frozen for several months.

Compared to white potatoes, cassava root is higher in protein but has nearly twice the number of calories. While yuca provides some vitamins and minerals, the amounts are minimal and won't have any beneficial impact. In fact, cassava contains something called antinutrients, which are compounds that inhibit the absorption of vitamins and minerals. However, it is naturally gluten-free, appealing to those with dietary sensitivities.

There are two varieties of cassava—sweet and bitter. Both contain prussic acid (hydrocyanic acid), which can cause cyanide poisoning; therefore, cassava can never be eaten raw. Cooking or pressing the root thoroughly removes the poison.

You won’t come into contact with bitter cassava in United States grocery stores. Sweet cassava is sold in American markets fresh or frozen. Bitter cassava is processed into safe edible flours and starches, which in turn are made into breads, pastries, and cakes. On the French-influenced islands, cassava meal is known as farine, a shortened form of farine de manioc.

How to Cook Caribbean Roots and Tubers, or Ground Provisions 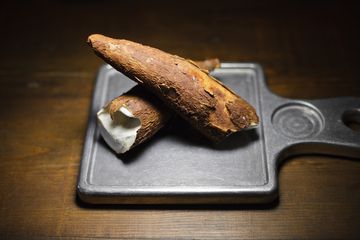