How Cheddar Cheese Is Made

Everyone knows that Cheddar is a type of cheese, but what is cheddaring? Cheddaring is a cheesemaking process that cheese must go through to become cheddar. Why? Cheddaring gives the cheese a dense, layered texture.

What Happens During Cheddaring?

After curds form during the cheesemaking process, they are cut up into smaller pieces to expel liquid (whey). The smaller the curds are cut, the more liquid will drain from them. The more liquid that drains from the curds, the firmer the resulting cheese will be.

This step of cutting the curds is used when making almost all types of cheese, but it is taken one step further for cheddar cheese.

Cheddar cheese was first made in England but is now made pretty much everywhere. Cheddar has a flavor that is different from other types of hard and semi-hard cheeses due to several things—namely, the heating or "cooking" of them, the process of cheddaring, and the aging process. Beyond this, cheddar from different parts of the world tastes different because the flavor of the milk varies, the aging time varies, and the skill level and techniques of the cheesemakers vary. 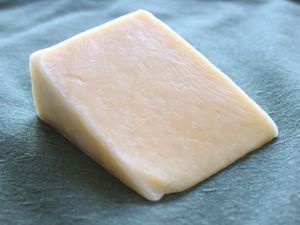