Coriander can refer to both an herb and a spice. Although the term coriander is used in much of the world in reference to both cilantro leaves and seeds, in the Americas, it generally refers to the dried cilantro seeds which are used as a spice both in whole form and ground. Cilantro leaves and coriander seeds taste very different and cannot be substituted for each other in recipes.

Coriander seeds are round and tannish brown. They have a bit of a spicy, citrus flavor and are available in the spice aisle of most markets. You will need to pay special attention to the recipe instructions as well as to how the ingredient is listed to determine whether the author intends the seeds or the leaves to be used in the recipe.

Coriander is one of the oldest herbs and spices on record. Coriander was mentioned in the Bible, and the seeds have been found in ruins dating back to 5000 B.C. Its name comes from the Greek word koris, meaning a stink bug. This is likely a reference to the strong aroma given off by the cilantro plant leaves when they are bruised.

Herbs vs. Spices: What's the Difference?

Herbs are the fresh, leafy part of a plant. Herbs vary greatly in flavor and can be sweet, spicy or savory. Spices come from the seeds, root or bark of the plant and are considered any edible part of the plant, besides the leaf, that can be used for seasoning. Some plants have both. In this case, cilantro refers to the leaves and coriander refers to the seeds.

Coriander is a member of the parsley (Apiaceae ) family. It's an annual plant that grows on slender green stems. The plant can grow up to three feet tall and the leaves resemble parsley leaves. When coriander flowers, it produces white flowers, with a hint of purple, and round, light brown seeds. These seeds can be harvested and used as spices. Coriander grows as a native plant around the world, including Europe, Asia, Africa and in the Americas.

Using coriander is quite different from using cilantro because their flavors and textures are completely different. In general, coriander seeds are toasted before using, and ground coriander is used as a spice to cook things like curry and in baked goods. Cilantro is often used as a garnish or added at the last minute to flavor foods ranging from stir-fries to tacos.

Just like their cooking techniques are different, so are the storage practices of coriander and cilantro. Most coriander is dried and should be kept in an air-tight container at room temperature. Cilantro is typically stored cold, either in the refrigerator or freezer.

The taste of cilantro is described as lemony, tart and citrusy. There is a small portion of people that think cilantro tastes like soap. This can be linked back to a rare gene that detects aldehyde chemicals, that are also present in soap. When cooking for a crowd, a common substitute for cilantro is parsley. 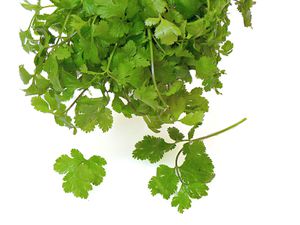 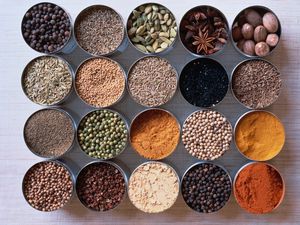