All About CTC Tea

CTC tea actually refers to a method of processing black tea. Named for the process, "crush, tear, curl" (and sometimes called "cut, tear, curl") in which black tea leaves are run through a series of cylindrical rollers. The rollers have hundreds of sharp teeth that crush, tear, and curl the leaves. The rollers produce small, hard pellets made of tea. This CTC method is different from standard tea manufacturing, in which the tea leaves are simply rolled into strips. Tea made via this method is called CTC tea (and sometimes known as mamri tea).

The CTC process was invented in the 1930s by Sir William McKercher in Assam, India. The process spread in the 1950s throughout India and Africa. Today, most black tea produced around the world uses the CTC method. The finished product results in tea well-suited for tea bags, is strongly flavored, and quick to infuse.

Drawbacks of the CTC Method

By its nature of crushing and tearing, the CTC method can be known to homogenize the flavor of the black tea. When the tea is crushed and torn, the pressure causes the tea to naturally break down the cells. The broken cells become fully oxidized, causing the tea to taste strong, but lose its subtlety. CTC teas in their dry form can be mixed with inexpensive teas, making it harder to distinguish the actual types of tea leaves used in the tea. Conversely, whole and broken leaf teas are much harder to mix with inexpensive teas. If the tea at the start of the CTC process is high quality, the finished CTC tea product will also be good quality.

The CTC method makes CTC tea have a consistent flavor profile from one batch to the next. A common type of CTC tea is Assam tea, a well-known black tea. Assam tea usually steeps as a deep ruby red color with a rich, slightly bitter flavor. Other common black tea blends include English Breakfast, Irish Breakfast, and Afternoon Tea. Assam tea is the classic tea black tea that is used in Masala chai recipes. Masala chai, literally meaning "mixed spice tea," is made with milk, black tea, and spices.

The CTC method is most often used for most black tea varieties. Black tea generally has a range of caffeine levels per cup, ranging from 50 to 90 mg of caffeine per cup. Many factors influence the caffeine levels in tea, including the actual tea leaves, the temperature of the water, and the brewing time. Additionally, a masala chai tea will likely have less caffeine than a full cup of Assam tea. Masala chai is made with a spice blend and milk (which do not contain caffeine).

Where to Buy CTC Tea

Most black teas are considered CTC teas and can be purchased at any grocery store. If you are particularly interested in a tea's origin and production details, it's best to visit a specialty tea shop or browse online tea vendors to find the exact type of tea you are looking for (or experiment with new tea varieties). 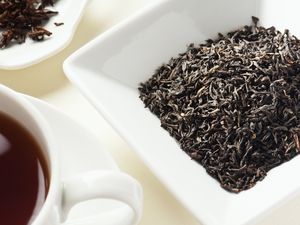