Daikon is an edible root vegetable from the Brassicaceae family that comes in many shapes, colors, and sizes. Daikon is a very popular vegetable in Japan, though it's used in many other cuisines as well. Its versatility makes it an easy vegetable to incorporate into raw or cooked dishes like salads, stews, soups, or oven-roasted preparations.

Daikon has been a steady crop in Japan for centuries and its name translates to English as "big root," as it grows rapidly and large in size when the conditions and moisture in the soil are beneficial.

Daikon is a radish, usually white in color and mild in flavor. Like other radishes in the same family, daikon has a napiform shape, meaning it's thicker and rounder at the top, while slimmer and pointier at the bottom. Daikon has a crunchy texture, but is milder in flavor compared to other similar vegetables. Also known as white radish, Japanese radish, Chinese radish, winter radish, or luobo, this flavorful vegetable can easily be incorporated into any dishes that would use carrots or turnips instead.

There are plenty of non-white varieties of daikon, but the white kind is the most common one. Chinese and Indian varieties have a mild green hue from close to the leaves until halfway down and are thicker and more peppery in flavor than white. A Chinese variety that's green on the outside and bright pink inside known as watermelon radish is actually a type of daikon that's rounder in shape.

The Cantonese l﻿obak or lo pak has a light green color around the top of the root near the leaves. One Korean variety called mu has a similar green and white coloration but is rounder and shorter. Lobak and mu are both spicier with a more peppery bite than daikon radish.

Daikon can be served raw or cooked. It is often peeled before use, but the skin is edible so peeling is optional. Daikon can be thinly sliced for a garnish, diced for cooking, grated for pickling, or used in baked goods and savory dishes. The greens, when available, can be added raw to salads or stirred into soups and other hot dishes. The sprouts, or kaiware, are used raw in Japanese green salads and vegetable sushi.

How to Cook With Daikon

As you would cook a carrot or a turnip, daikon can take many forms and endure various types of cooking methods, from braising and roasting to steaming or grilling. Its tangy flavor and crunch make it apt for salads and as a garnish on soups, open-face sandwiches, or wraps, if used raw. When steamed, braised, or used in soups or stews, the texture becomes softer but with some pleasant soft bite.

Raw daikon radish has a sweet and lightly spicy flavor, and it tends to be milder than the peppery red radish. The level of spice can depend on the variety, with some having a stronger flavor. The flesh is very crunchy and juicy. Cooked daikon tastes mellow and sweet and becomes tender, like cooked turnip. The greens are very peppery, with a pungent flavor that mellows slightly when cooked.

Where to Buy Daikon

Daikon can be found in some supermarkets and Asian markets, where it's often sold loose by the pound and available year-round. If you're shopping for your vegetables locally, the radish is in season in the winter and is available at some farmer's markets and CSA services (Community-Supported Agriculture).

Depending on the variety, white radishes can range in length from about 6 inches to as long as one's arm. Some are rounder than others. Regardless of the variety, look for daikon that is firm with tight skin, heavy for its size, and free of cuts and dark or soft spots.

Growing daikon in your home garden is also possible. Plant the seeds in the summer or early fall (depending on your growing zone) for a winter harvest, or about two months before the first frost. The plant is often used in agriculture as tillage since it leaves behind a soil cavity for crops such as potatoes and adds nutrients back into the earth.

All About Japanese Vegetables 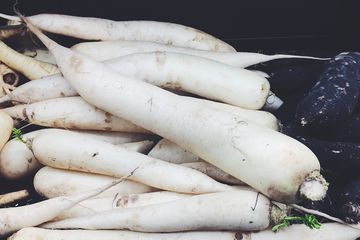