When it comes to yogurt, there are more choices than ever, from fat content to origin to non-dairy options. One of the many selections found on the shelves is French-style yogurt, which may sound like a culinary gimmick, but is actually a real type of yogurt that comes from France. It's classically made in small batches, mostly in glass jars, using only a few ingredients. This dessert-like yogurt is creamy, rich, and decadent.

With so many types of yogurt on the market, French yogurt stands out for its purity of ingredients, richness, and how it's made. Instead of the ingredients and cultures mingling in a large vat and then being portioned off, this method, called post-set, makes each serving in its own container. That means the ingredients, such as whole milk, sugar, yogurt cultures, and optional fruit and flavorings, are all put in individual jars to set until ready to eat.

This made-to-order style of small-batch yogurt is similar to other yogurts in that it uses whole milk and live cultures which are left to set in warm, moist surroundings. There is a mild difference in taste between French-style and other yogurts, and since each jar of French-style yogurt is made individually, there could be little nuances here and there from jar to jar. True French yogurt is not made fat-free.

The first commercial brand of French yogurt to hit the United States came about in 1981 under the name Yoplait. Today there are many versions of this brand of yogurt, though Yoplait has evolved into something much different from what they eat in Paris. That's why Yoplait (which now is mainly owned by General Mills) launched Oui in 2017, the company's more authentic take on French-style yogurt, which is available next to all the other big-name yogurts at most major grocery stores.

In addition to the original, Oui has developed other versions, including layered dessert, crème dessert, and coconut dairy alternative. Different flavors are offered within each type, such as those with fruit like strawberry, pineapple, and blackberry, as well as flavorings such as caramel, honey, and vanilla. Other brands offering similar flavors are La Fermière and St. Benoit.

Eat and use this yogurt any way you would a sweet, creamy dairy ingredient. Enjoy for breakfast with some fruit or granola or serve a bowl of it with chocolate chips for dessert in lieu of ice cream. French-style yogurt is a great snack food, and even more satisfying with pretzel sticks or a banana dipped in. Use plain French-style yogurt to top fruit salad, or add a drizzle of honey and a handful of almonds for a healthy and sweet treat. This yogurt can also be an ingredient in baked goods and smoothies. 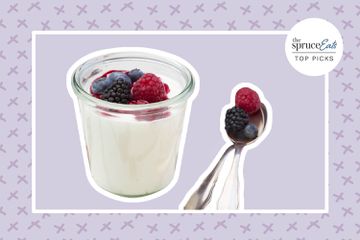 Although there's a mild tang to this thick yogurt, the plain version is mainly slightly sweet and creamy. Of course, any additional ingredients, like vanilla or fruit, will contribute other flavors and textures.

To make your own French-style yogurt, you will use the normal method of making yogurt but allow the mixture to incubate in individual jars or containers. Homemade or store-bought French-style yogurt can be used in place of regular yogurt in a variety of recipes.

Where to Buy French-Style Yogurt

The most readily available brand of French-style yogurt is Oui, which is often stocked among the other brands in the dairy section of the grocery store. You can also try to find a local person who is making French-style yogurt, or make it yourself.

All yogurt should be refrigerated. Technically, French-style yogurt doesn't have to be covered since it's so fatty, but it helps to keep it protected so that it doesn't absorb other flavors in your refrigerator. Homemade yogurt can last weeks while sealed and up to two weeks after opening. Store-bought yogurt is good until the expiration date (and maybe a few days after) printed on the label.

How Do You Make Icelandic Skyr (Yogurt)?
Featured Video