Halibut is a popular white fish, the largest of the flatfish, with firm, lean, meaty flesh and mild, slightly sweet flavor. Some common methods for cooking it include steaming, baking, poaching braising and pan-frying.

Halibut is the largest of the flatfish, from the same order, Pleuronectiformes, that includes other flatfish such as flounder, turbot, sole, plaice and fluke. It's a firm, meaty fish that is exceptionally lean, with a mild flavor that never tastes fishy. It has bright white flesh, and is usually sold in thick fillets and steaks. It's one of the more expensive fish, retailing for $25 per pound or more.

How to Cook Halibut

Halibut most often comes in fillets, and these usually have the skin removed, but if they do have the skin, you should remove it before cooking as it is chewy. The key thing to bear in mind when cooking halibut is that it's an extremely lean fish, which means that it can dry out easily. So smoking halibut is not recommended.

The best ways to cook halibut are moist heat methods like poaching, steaming or braising. That does not mean that it can't be baked or grilled, but when doing so it's important to make sure that it doesn't overcook. When cooking halibut with dry heat, aim for an internal temperature of 125 to 130 F, and use a probe thermometer to check it.

Halibut is a mild-tasting fish with slight sweetness and a firm, meaty texture. It's one of the leanest fishes there is, with no fishy taste whatsoever.

In addition to recipes such as the ones here that specifically call for halibut, you can generally also substitute halibut in any recipe that calls for a firm, white fish, such as tilapia, cod, bass, grouper, haddock, catfish, and snapper.

Is Halibut Good for Me?

Many fish are known to contain dangerous levels of mercury, especially larger fish such as tuna, swordfish, shark and marlin. Halibut is considered a "good" choice in terms of mercury levels, as opposed to a "best" choice, which means that it is recommended to eat no more than one serving per week of this fish.

Where to Buy Halibut

Halibut is one of the most widely available fish, and can easily be found in supermarkets, both at the seafood counter and the frozen section. It's usually sold in fillets, which means they are boneless cuts taken parallel to the backbone, and sometimes in the form of steaks, which are cut across the backbone and have a section of backbone in them.

Like most fish and seafood, the frozen version of halibut is usually the best quality, since it's typically processed and flash frozen on the fishing boat to capture its peak freshness. Frozen halibut can also be purchased from online retailers. Halibut caught in the U.S. and Canada is considered sustainable, and responsibly harvested under U.S. regulations. Halibut from Mexico, on the other hand, is classified as "avoid" by the Monterey Bay Aquarium Seafood Watch program.

If you purchase frozen halibut in a vacuum-sealed package, you can store it in your freezer until you're ready to use it. The best way to defrost it is to transfer it to the refrigerator the night before you plan to use it. Halibut that wasn't frozen when you purchased shouldn't be stored, but cooked the day you bring it home. If that's not possible, you should absolutely use it within a day or two at the most. Freezing it isn't the best idea either, since in most cases it was already frozen and then thawed, and refreezing thawed items is one of the most basic food-safety no-nos.

One fish that halibut is often compared with is flounder, because they are both flatfish, because some fish that are flounder are sometimes called halibut, and vice-versa. In terms of the fish themselves, one major difference between the two is their size. While a typical flounder might max out at around 30 to 40 pounds, it's not uncommon for Pacific halibut to weigh in at 300 pounds, and Atlantic halibut can weigh 400 pounds or more. When compared with flounder, halibut is more more meaty and less flaky, with a significantly firmer texture. Halibut is also considerably leaner than flounder. Both halibut and flounder have a mild, slightly sweet flavor with no fishy taste.

Tips for Grilling Halibut
Article Sources
The Spruce Eats uses only high-quality sources, including peer-reviewed studies, to support the facts within our articles. Read our editorial process to learn more about how we fact-check and keep our content accurate, reliable, and trustworthy. 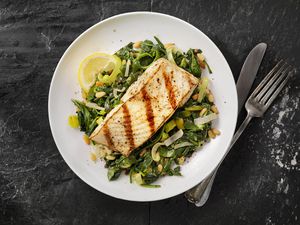 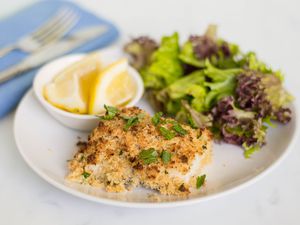 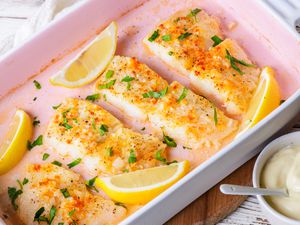 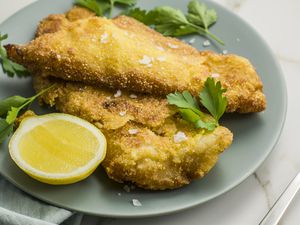 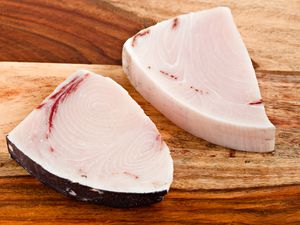 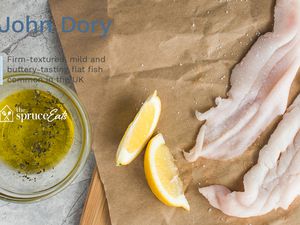 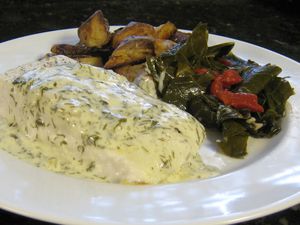