Can Cheese Be Lactose-Free?

How to Find a Cheese That's Low in Lactose

Lactose, also called milk sugar, is found in all dairy products including milk, cheese, and yogurt. Lactase, an enzyme that naturally occurs in the human body is needed to digest lactose. As people age, their lactase production can decrease, causing a sensitivity to lactose. People who are lactose intolerant may think they have to give up cheese altogether. Fortunately, this isn't the case since there are some cheese options.

Many types of cheese naturally have very low or non-measurable amounts of lactose. How can you tell how much lactose a cheese contains? Let the cheesemaking process be your guide.

During the cheesemaking process, the milk is thickened and the whey (liquid) is drained from the curds (solids). Whey typically has more lactose in it than curds do. Since the whey is drained from the curds before the cheese is made, this removes quite a bit of lactose. The curds used to make softer cheeses (like Brie) have more moisture (whey) in them than the curds used to make hard, dry cheeses like cheddar. Therefore, soft cheeses tend to have more lactose than hard cheeses.

According to Beemster, a producer of Dutch Gouda, "during the maturation process, the lactose changes into lactic acid." Beemster claims their Classic Gouda (matured 18 months) and XO Gouda (matured 26 months) is lactose-free. However, some of their other varieties of Gouda that aren't aged as long do have traces of lactose. Cabot Creamery, a Cheddar producer, says, "Aged cheeses, such as Cabot's naturally aged cheddar contain 0 grams of lactose. In fact, unlike many other dairy products, cheese, in general, is very low in lactose. Most contain less than 1 gram per serving and should not cause any lactose intolerance related symptoms."

Other cheese types that are aged for long periods of time and are likely to have very small or non-measurable levels of lactose include:

Although not really cheese, there are varieties of "cheese" made without dairy that contain no lactose at all. Since they are not made with milk, these types of "cheese" don't have the same flavor or texture as cheese made with milk, but some people find them to be a fine substitute. The options include soy cheese, rice cheese, cashew cheese, and almond cheese.

Another option is yogurt cheese. Although made from dairy, Cultured Way, a manufacturer of yogurt cheese, claims that their yogurt cheese is made from "...active yogurt cultures, acidophilus, and bifidus, which remove the milk sugars during the cheesemaking and aging process." Yogurt cheese is closest in taste and texture to real cheese, and also melts well, so it is an ideal substitute for those looking for a lactose-free cheese. 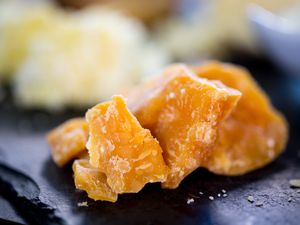 Can People Who Are Lactose-Intolerant Still Enjoy Cheese?