In the early 2010s, coconut oil hit peak popularity as a culinary oil with amazing health benefits. Then it was pushed out of the spotlight by another oil--one that is actually made from it. MCT oil boasts everything that's great about coconut oil, but in a more concentrated form. Let's examine what MCT oil is and how you can reap all its benefits in your own meal plan.

A Guide to Healthy Cooking Oils 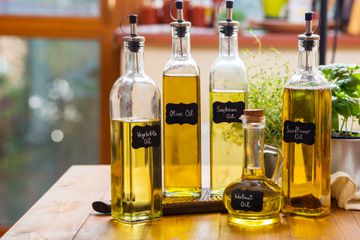 What Is MCT Oil?

Because coconut oil is composed of about 50% medium chain triglycerides, it's an excellent base from which to create MCT oil, which is a man-made product and does not occur in nature. The other oil used to make MCT oil is palm oil, but this is considered less ideal due to the issue of deforestation that growing and harvesting tropical palm trees has led to. The medium chain fatty acids in MCT oil include capric and caprylic acids.

What Is MCT Oil Best For?

MCT oil is most commonly used as a dietary aid. There are several reasons for that: for one, MCT oil can trigger the release of peptide YY and leptin, the hormones your body release to signal fullness, which can lead to less hunger and subsequently less food eaten. Another reason it's useful for dieting is that it has about 10% fewer calories than other oils, leading to lower calorie consumption. Lastly, MCT oil has a positive impact on the gut microbiome, leading to healthier digestion that can further facilitate weight loss.

There is preliminary information that MCT oil may be helpful for a host of other health conditions, including candida, autism, epilepsy, diabetes, and Alzheimer's. So far, those studies have all been small, and most have not been conducted on humans, so more research is still needed.

How to Use It

MCT oil is a shelf stable product. As a liquid, it's always sold in an opaque bottle—this is to prevent the sunlight from oxidizing it. It keeps well at room temperature for at least 1 to 2 years. You can use it in your food preparation, but because it has a low smoke point, you don't want to use it as a cooking oil. MCT oil works best for applications like salad dressings, blended beverages, and as a finishing oil once food has been removed from heat.

MCT oil is also available as pills and powders. In pill form, it's typically taken in the morning, and you should follow the manufacturer's directions on dosage. The powder is a convenient on-the-go option, and is often sold as a shelf stable coffee creamer. Unlike its liquid form, MCT powder will only last about a year.

As far as taste goes, MCT oil is fairly neutral. It may have a mild coconut flavor, but that should never be prominent. It's clear in color and thin in texture. If heated too much, MCT oil will turn a color that most closely resembles a translucent pale blue.

Where To Buy MCT Oil

Previously available only on the internet or at specialty stores, MCT oil has become increasingly more common in mainstream retail establishments. It can be found at health food stores, supplement shops, and even at major chain stores like CVS and Walmart. Similar to many niche ingredients, you can likely find the best deals online.

When sourcing MCT oil, you'll pay more for higher quality. That means both coconut sourcing over palm, as well as sustainable and ethical harvesting that is free of slave labor.

MCT oil is often used by people following ketogenic diets. Since that diet focuses on fat consumption and utilizing your body's ability to use fat for fuel, it makes perfect sense that MCT oil would be a valuable tool. Because it's so easily used by our bodies for energy, MCT oil is an efficient tool for a keto diet. It should easily be converted to ketones by the liver if you're in a ketogenic state.

To use MCT oil in keto dieting, you can add it to meals that have low macro ratio of fats, to help boost their fat content. You can also take MCT oil pills to increase your fat intake between meals. Because it doesn't harden when refrigerated, it's difficult to this ingredient in keto snacks like fat bombs.

MCT oil can be used for intermittent fasting in several ways. First, a small dosage can be used outside of your eating window, provided it's minute enough to not impact your blood sugar or take your body out of fasting mode. By bypassing the intestines and heading straight to the liver for absorption and usage, it's possible for MCT oil to not affect your fasting. Next, because MCT oil helps you to feel full, it can assist with shorter eating window, as you may be less hungry outside of your window. Lastly, since MCT oil can have metabolism boosting effects, it may be able to help you reach you weight loss goals of IF.

MCT oil is general considered safe to consume, but you can't go all in on trying it. That's because--and we cannot stress this enough--it can be very, very harsh on your digestive system. Diarrhea is common when introducing MCT oil into your diet, and it should be expected. Even though a standard serving is one tablespoon, you ought to begin with one teaspoon at most, and gradually move to a tablespoon over the course of one week or more. Don't be surprised if you experience gas, bloating, or cramping initially, even at small dosages. These usually resolve as your body gets used to the oil.

Due to its impact on hunger, MCT oil is not safe for anyone with a history of disordered eating, and is particularly unsafe for anyone who has dealt with anorexia. This risk in regards to eating disorders is twofold: not only can MCT oil make someone eat too little because it triggers leptin production, for anorexics it has been shown to increase ghrelin, the hormone that tells your body that it's hungry. It should be avoided by anyone who has experienced disordered eating.

MCT oil has also shown to increase the amount of fat stored in the liver long term. Anyone suffering from fatty liver disease should avoid this oil.

Since it's a high fat food, you'll want to avoid adding MCT oil to dishes that are high in carbs. That's because it will lead your body to store the carbohydrates as fat, while it uses the fat in the oil for fuel. MCT Oil should be added only to dishes that are not cooked, and never used as a saute or roasting oil. Some recipes that could benefit from the addition, or replacement, of MCT oil are:

MCT oil is a man-made oil that is composed of medium chain triglycerides, which can be beneficial for metabolism and energy. It can be a valuable dietary tool, and is useful for both keto and intermittent fasting diets. You shouldn't heat it because of it's low smoke point, but you can add MCT oil to salad dressings and cold foods. It should be avoided by anyone with liver issues or a history of disordered eating. Stomach irritation is common when introducing MCT oil into your diet, and it should resolve within a week or so.