Monterey Jack cheese, also known as Jack, is an aged cheese originating in California that's often used for melting, slicing, or snacking. High-moisture Monterey Jack sold in blocks has a semi-firm texture and mild flavor; varieties include Colby Jack and Pepper Jack. Traditional-style Jacks or Dry Jacks aged up to 10 months or more are firmer, lower in moisture, and more flavorful.

What Is Monterey Jack?

This mild, meltable cheese originated when Franciscan monks brought their recipe for queso del pais, a fresh, white cheese, to California's Monterey County in the 18th century. Commercial production of Monterey Jack began in the 1850s and is often attributed to Scottish immigrant David Jacks, who marketed the product as "Jack's Cheese." By the 1880s, Jacks had 14 dairy farms across California producing the cheese. Today, Wisconsin is also a significant producer of this style of cheese.

At the start of World War I, imported Italian cheeses were no longer available in the United States. In response, cheese purveyor D.F. DiBernardi developed the recipe for Dry Jack to act as a substitute for hard, flavorful grating cheeses such as Parmesan and Grana Padano.

How Monterey Jack Is Made

Pasteurized cow's milk is gently heated in the cheesemaking vat, then cultures are added to the milk. Goat's milk may also be used. After the milk is cultured, rennet is added to coagulate it. The curds are cut into small pieces, then gently stirred and heated in the vat to remove whey. The whey is drained off, and then the curds are mixed with salt, pressed into cheese forms lined with cheesecloth, and pressed to expel additional whey. The wheels or blocks are flipped and pressed again.

For high-moisture Jack, the blocks are vacuum sealed in plastic and allowed to age for anywhere from six weeks to four months. For traditional Jack, round wheels are allowed to dry for a few days to allow the rind to begin to form. The exterior of the cheese is then oiled and allowed to age for up to 10 months or, for Dry Jack, even longer.

Any mild, semi-firm cheese that melts well, such as mozzarella, Colby, mild cheddar, Muenster, Havarti, or young Gouda, may be used to substitute for high-moisture Monterey Jack. These cheeses can be interchangeable with Monterey Jack in sandwiches, on a cheese board, or in recipes with melted cheese.

Monterey Jack is available in high-moisture and lower-moisture types. The high-moisture version is the semi-firm, easily meltable version you see sold in blocks at the grocery store. It's typically aged in blocks and vacuum sealed in plastic for up to four months. The same base cheese is used to make Pepper Jack and mixed with Colby cheese during the production process to make Colby Jack, known for its white and orange marbled curds.

Traditional Jack, on the other hand, is produced in wheels that are rubbed with oil to help protect the interior of the cheese from drying out too quickly while the rind is forming. This cheese is much firmer and lower in moisture and may be aged for up to 10 months.

Monterey Jack cheese that has been aged for more than 10 months is known as Dry Jack. This firm, grateable cheese is much sharper and fruitier in flavor than younger, milder versions. One of the best-known producers of Dry Jack is California-based Vella Cheese Company, which rubs its rinds with a mix of cocoa, black pepper, and oil to better preserve the cheese.

Use high-moisture Monterey Jack anywhere a mild, semi-firm cheese is called for. It especially shines when melted in recipes such as macaroni and cheese, queso dip, quesadillas, burgers, grilled cheese sandwiches, casseroles, or enchiladas. This cheese can also be sliced and served on deli sandwiches or cut into squares or cubes for a cheese board.

Longer-aged Jacks such as Dry Jack have a much firmer texture and stronger flavor. They can be grated or melted similar to Parmesan and can also be eaten as a table cheese.

Store Monterey Jack cheese in its original packaging in the coldest part of your refrigerator. After opening, wrap the cheese well in plastic wrap or seal it in an airtight plastic or glass container and keep it in the fridge. Properly stored, high-moisture Monterey Jack should last at least three weeks, and low-moisture varieties such as Dry Jack can last even longer.

If mold has formed on the cheese, cut around the area with a knife to remove it. Take care not to draw the knife though the cheese, which may spread the mold to other parts of the block.

Since the high-moisture Monterey Jack sold in the supermarket is aged in plastic, it is rindless, and the whole piece of cheese can be eaten. However, Jacks such as Vella Dry Jack have a rind that may be eaten. 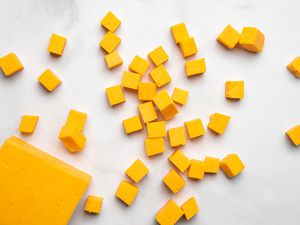