Pumpkin beer is a seasonal beer that includes the flavor of pumpkin and/or pumpkin pie spice. An annual release each autumn, it's popular among American craft brewers and appeals to drinkers that get a fall craving for all things pumpkin spice. Pumpkin ales dominate this style, though pumpkin stouts, IPAs, lagers, and radlers can be found. Pumpkin beers can be malty-sweet, bitter, or spicy, range in color from pale to very dark, and be light sessionable brews or strong imperials. With all of this diversity, pumpkin beers offer a variety of tastes for the pumpkin-loving beer drinker to explore.

What Is the Difference Between Pumpkin Beer and Oktoberfest?

Despite the seasonal name, Oktoberfest is completely different than pumpkin beer. Oktoberfest (also called märzenbier, or March beer) is a traditional style of German lager that was originally brewed in March and released in October. The amber-colored brew has been around since the late 1800s, is now available year-round, and is brewed with no flavoring additives. Instead, Oktoberfest is made with bottom-fermenting lager yeast and a specific blend of hops that create a sweet, crisp beer perfect for the fall season.

In contrast, pumpkin beer can be any style of beer—ales are most common, and these tend to have a malty sweetness and hoppy bitterness. All pumpkin beers get their flavor through the introduction of adjuncts, though each brewer has their own approach. Some include real pumpkin, roasted or as a purée, in the brewing process, while others don't use any pumpkin. Either way, most pumpkin beers include a blend of baking spices typically found in pumpkin pie—e.g., cinnamon, clove, nutmeg, ginger, and allspice—because the winter squash does not have a lot of flavor on its own. Some pumpkin beers add more flavor like molasses, orange vanilla, coffee, or spicy peppers, and a few are barrel-aged.

The adjuncts used to flavor pumpkin beer would technically classify it as a fruit beer (when it includes pumpkin) or a spiced beer (when spices are used alone). Those that include both pumpkin and spices could fall into either category.

Oktoberfest Is a Favorite Style of German Beer 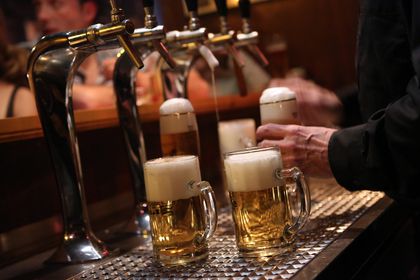 According to historians, pumpkin beer is nothing new. The original brew of pumpkins, molasses, bran, and corn malt was brewed by American colonists who couldn't afford imports from Europe. It largely fell to the pages of history once true beer was brewed in the United States. Since the 1980s, it has been a favorite seasonal beer for craft brewers.

The majority of pumpkin-flavored beer is simply labeled "pumpkin ale." This is a diverse category in itself and can be any style of ale, from pale ales to brown ales and wheat beers. The one thing that all pumpkin ales have in common is that they're brewed with top-fermenting ale yeast. The malty sweetness and aromatic qualities are a perfect base for the spice blend that's so common in pumpkin beers.

Dark stouts and porters are also popular among pumpkin beers. These ales tend to be thick and creamy and commonly use additional adjuncts for dessert-like flavors, such as chocolate, coffee, or vanilla. Pumpkin stouts and porters vary as much in brewing technique as other ales, though generally use a combination of pale and black malts.

Not as common as other pumpkin ales, some brewers who specialize in India pale ales (IPAs) will release this seasonal. Pumpkin IPAs maintain the hoppy bitterness that is the signature of the ale's style while adding the pumpkin spice flavorings. These tend to be the hoppiest of all pumpkin beers, though usually top out at 70 IBUS (some standard IPAs can reach 100 IBUs). Always striving to stand out, some pumpkin IPAs may include unusual flavors like hot chile peppers.

Some pumpkin ales include the name "imperial." It can be found on ales, stouts, or IPAs. "Imperial" implies that the beer is strong; typically above 7 percent alcohol by volume (ABV) and up to 12 percent ABV. This stronger alcohol content intensifies the flavor, though imperials tend to be as well-crafted for a balanced flavor as any lower-point beer.

Barrel-aged beer is increasingly common, and pumpkin beer takes to this extra step rather well. Finishing the beer (most often an ale) in oak barrels that once housed a distilled spirit imparts a mellow oakiness and hints of the liquor's flavor. Former rum, bourbon, and scotch barrels are employed most often, and the flavors blend nicely with pumpkin spice.

While lagers are the most common type of beer and pumpkin lagers are rare, they do receive this seasonal flavor surprisingly well. Few brewers take on this style that marries the crispness of lagers with the comforting qualities of pumpkin spice. Like all lagers, they use bottom-fermenting yeast and tend to stay in the amber lager or bock categories rather than the pale pilsners. If it weren't for the pumpkin and spice adjuncts, pumpkin lagers would be the most similar to Oktoberfest.

A pumpkin shandy or radler is the closest pumpkin-flavored representation of a fruit beer. While most pumpkin beers are barely fruity, these play it up to create a drink as refreshing as a citrus shandy or radler. The brewing method is not often revealed, though shandies are often a blend of beer and lemonade; when it's sparkling, that's a radler. Pumpkin shandies typically have a wheat beer base blended with pumpkin purée, spices, and possibly soda for extra carbonation. Reminiscent of a pumpkin-flavored hard cider, they're easy drinkers and light on the alcohol.

How To Serve Pumpkin Beer

Due to the adjuncts, pumpkin beers tend to have an inviting orange or amber color, so don't keep these confined to the bottle. They're beautiful beers to look at and deserve a glass. Beer glassware that has a bulb shape will trap and enhance the beer's warming aromatics and improve the experience. When pouring, tilt the glass at a 45-degree angle and bring it upright as it fills to get the perfect balance of beer and foamy head.

The recommended serving style for pumpkin beer should follow those of individual style. For instance, any of the pumpkin ales are best served at cellar temperatures (50 to 55 F) in stemmed tulip glasses. Any pumpkin ale—especially dark stouts and porters—will also do great in a nonic pint glass. Chill pumpkin lagers and shandies, and pour them into pint glasses or steins.

The first general rule of food and drink pairings is to avoid an exact flavor match. While some pumpkin beers may work with pumpkin pie, it's often too much of the same taste. Skip the pumpkin dishes (including soups, bread, and other savory recipes), and try complementary foods instead. A hearty beef stew, roasted turkey, or slow-cooked pot roast would be a nice match. Pumpkin beer has a dessert quality, and pairs well with ice cream, apple or pecan pie, and a simple cheesecake. It's also nice with caramel, chocolate, and coffee desserts. For a cheese platter, try an aged gouda, gruyère, blue cheese, or seasonal cheese that includes cranberries.

California's Buffalo Bill's Brewery is credited with releasing the first commercial pumpkin ale in 1986. Still made, it has been joined by countless others that make their annual appearance in beer coolers. They're generally available from September through November, though some may stick around through the winter holidays.