What Is Roquefort Cheese?

Roquefort cheese is a raw sheep's milk blue cheese made in southern France. Its signature blue marbling is produced by the Penicillium roqueforti fungus, a type of mold that is added to the milk early in the cheesemaking process.

What is Roquefort Cheese?

Roquefort cheese has a moist, crumbly texture and a sharp, tangy, salty flavor. Its color is white to pale yellow, and it is marbled with the blue to blue-green mold that gives it its characteristic look and flavor. Roquefort cheese does not have a rind. Its flavors and aroma feature buttery, caramelly and smoky notes. If heated gently, Roquefort will melt, but high heat can cause it to separate.

The region around the village of Roquefort, in southern France near Toulouse, is known for its limestone cliffs and caves, and the grass and other plant life that grows there, and is eaten by the sheep that graze on it, strongly influences flavor of Roquefort cheese.

Roquefort cheese has DPO status, meaning that only cheeses from that specific geographical location can use the name Roquefort. Similar regulations apply to the fodder on which the sheep are fed and the caves in which the cheese is aged. The sheep, in turn, must be of the the Lacaune breed, which are native to the region.

How Roquefort Cheese is Made

To make Roquefort cheese, whole unpasteurized sheep's milk is heated to around 80 to 90 F, after which it is combined with rennet and salt. The resulting curds are then inoculated with the penicillium spores, and the mixture is allowed to rest for an hour or two. Next, the curd is gently cut into small pieces, the whey, or the liquid that separates fro the coagulated milk proteins, is drained, and the curds are transferred into round molds. The molds are turns several times, which allows the whey to fully drain away.

After spending several days in a dry salt bath, the cheeses are pierced with metal skewers, which allows oxygen to interact with the fungus spores, which is what produces the blue marbling.

Finally, the cheese is aged for 3 to 9 months, although most Roqueforts are fully ripened within 5 months.

As for the fungus itself, some cheesemakers use a liquid culture that is created in a lab, others, sprinkle a powder made from moldy bread into the curd, and some use a combination of methods.

Roquefort cheese can be served as a table cheese, as a key part of a cheese platter, paired with fresh or dried fruits, nuts such as walnuts, hazelnuts and almonds, breads and crackers, or crumbled over salads. Roquefort dressing, made by combining a basic vinaigrette with mayonnaise, Worcestershire sauce and crumbled Roquefort cheese, was popularized in the early 20th century, and today's blue cheese dressings and dipping sauces continue the tradition.

Roquefort cheese works equally well as a pizza topping, in quesadillas, on sandwiches, in casseroles, as a topping for steaks and burgers, baked tarts, roasted vegetables, as a stuffing for everything from peppers to olives, and as the base for a cheese sauce for pasta and gnocchi.

Enjoy Roquefort cheese in these recipes, or in any recipe that calls for blue cheese generally. 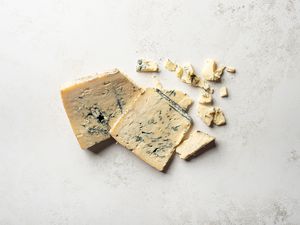 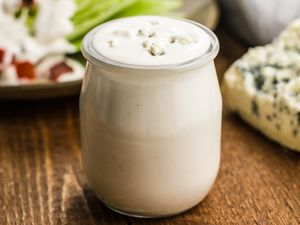 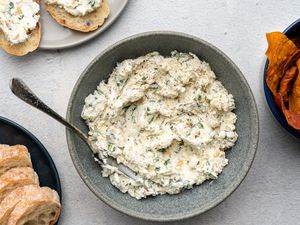