A powerhouse of nutrients, spinach is a leafy green grown and eaten all over the world, though it's native to Asia. Harvested in the spring and summer, spinach is used for its leaves, which can be cooked or eaten raw. Filed with the Amaranthaceae, or amaranth family, spinach shares genes with beets, chard, quinoa, and amaranth. Unlike regular lettuces, spinach doesn't grow in contained heads—it's harvested from loose stalks that pop up from the ground. The leafy green can be steamed, stir-fried, added to sauces and soups, served in a salad, and more. It's a staple everywhere from salad bars to steak houses.

Spinach is a type of leafy green vegetable that can be eaten cooked or raw and is found on all sorts of menus and in a wide range of recipes. It is typically available as whole leaf, with larger leaves and thicker stems, and as baby or spring spinach, with smaller, more delicate leaves and stems that are ideal for raw applications. Spinach requires little prep beyond a rinse, and is often sold bagged and already cleaned. The healthy, affordable ingredient can be added to anything from soups to stir-fries to salads to smoothies, and is enjoyed in a wide range of cuisines.

Historical accounts note spinach appeared in Persian cuisine around 2,000 years ago. Dubbed the "Persian vegetable," this plant was picked up by Chinese and Indian travelers and brought to their respected countries. It gradually made its way to the Mediterranean, and then onto France and England; spinach is noted in the very first English cookbook, Forme of Cury, which was published in 1390.

The United States saw spinach boom in the early 1800s, and American cartoonist E.C. Segar took to the stuff by using a can of spinach to fuel his popular character Popeye when he debuted in 1929. Legend has it this cartoon brought about the popularity of spinach and increased the sales by 33 percent those first few years.

How to Use Spinach

Spinach is an incredibly versatile vegetable that works well eaten raw or cooked and with sweet or savory ingredients. It just needs a good rinse before use and is often sold already rinsed and dried. It's sturdy enough in flavor to stand up to other hearty ingredients, and pairs well with rich, fatty foods such as cheese, butter, bacon, and cream; that's where steakhouse favorites like creamed spinach and wilted spinach salad with bacon come in.

Pasta dishes and quiche or omelets with cheese and spinach are popular uses of the vegetable, and the tender green can be incorporated into sauces like pesto and palak paneer. Spinach is the main ingredient in baked dishes like spanakopita and is used in dips like spinach and artichoke dip.

Raw spinach is popular in salads, often paired with a bold dressing such as blue cheese or ranch, but it also works well with a honey Dijon. Spruce up the greens with pecans, dried fruit such cranberries, chunks of cheese, sunflower seeds, and roasted beets. It's also a popular healthy addition to smoothies.

Spinach can be steamed, boiled, stir-fried, or sautéed with butter or olive oil. As with all greens, spinach will give off a lot of water and cook down significantly. Serve this wilted green as a side dish or add to soups, stews, or curries.

Spinach can taste a little bitter and some detect a metallic taste thanks to the vegetable's iron content. This is one reason pairing creamy ingredients with the green works so well, it tends to tame whatever aftertaste you may experience. But spinach is sweeter and milder than other leafy greens, and taste will vary depending on the type of spinach and how large the leaves are. Fresh spring baby spinach will have a sweeter and more subtle taste while the giant leaves of summer spinach tend to have a bit more bite. Smaller leaves are mild enough to virtually disappear into a smoothie that's full of flavorful fruit.

Spinach pops up in all sorts of dishes including soups, dips, salads, pizza, and pasta. It can be the star of the meal or a sidekick, whether it's cooked or served raw.

Where to Buy Spinach

Spinach can be found in any grocery store in a variety of ways. It's available fresh in bunches, stems intact, or pre-washed in five-ounce to one-pound bags or plastic clamshells for easy eating, such as for salads. It's also sold frozen in bags—both whole-leaf and chopped—and canned, and can be used in cooked dishes, typically after thawing and squeezing dry. When in-season, it can also be found at farmers markets. When shopping for fresh spinach, look for bright green, perky, crisp, and unblemished leaves.

Wash spinach in cold water and dry thoroughly, either using a salad spinner or paper towels. Once dry, add to a paper-towel-lined container or plastic bag and store in the crisper drawer of the fridge. Depending on how fresh it was when bought, it will keep a week or so this way. If the spinach is already washed and bagged or boxed, expect it to last about a week, though pay attention to the sell-by date. Frozen spinach should be kept fully frozen until ready to use, up to six months, and canned greens can be held in the pantry almost indefinitely until opened.

Spinach can be easily grown at home and matures more rapidly than larger leafy greens and head lettuces. The vegetable grows best in fertile soil in cool months like spring and fall and takes about six months to mature from seed to harvest.

Three types of spinach exist: savoy, flat and smooth leaf, and semi-savoy. The former features dark leaves that have a bumpy, crinkly texture. These are found mostly in farmers markets and in fresh bunches at specialty grocery stores. Flat-leaf is what most people think of when they think of spinach. It's smooth, broad, and much easier to clean than the other types. Semi-savoy is the hybrid of the two, and while the leaves have a bit of curl to them, they are less severe than savoy and look smoother. Water spinach is a different plant altogether even though it shares a name. 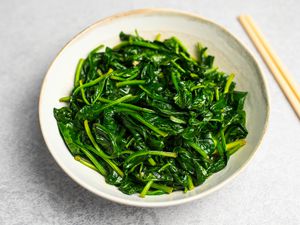