For many people, the most desirable steaks come from the short loin, with the exception of rib-eye steaks, which come from the rib primal cut. Short loin steaks belong on the grill.

The short loin subprimal is the front part of the loin primal cut, which runs from the 13th (and last) rib back to the top of the femur, or leg bone, where it joins the hip bone.

The rear part of the loin is called the sirloin; butchers separate the two by making a straight cut through the 6th (and last) lumbar vertebra. That means the sirloin portion contains the entire hip bone.

The tenderloin contains the key to the short loin. Butchers must decide whether to remove the tenderloin first or cut the intact subprimal into steaks.

This pencil-shaped muscle, called the psoas major, happens to be the most tender muscle on the cow. It extends almost all the way through the loin, across both the short loin and the sirloin, with the pointy end towards the front.

Top-dollar cuts such as the filet mignon and chateaubriand come from the tenderloin.

With the tenderloin intact, a butcher can cut the short loin into some of the more popular steaks. The main muscle of the short loin, the longissimus dorsi, also constitutes the rib-eye section of the rib primal cut. It actually runs from the chuck section all the way back into the sirloin. So every steak from the short loin contains the longissimus muscle, which we refer to as the strip loin.

The short loin itself typically measures 16 to 18 inches long, and it yields anywhere from 11 to 14 steaks, depending on thickness. Ideally, a butcher cuts them at least 1 1/4 to 1 1/2 inches thick, but you will sometimes see them as thin as 1 inch.

A typical short loin, starting from the front and working toward the back, contains maybe two club steaks (or bone-in strip steaks), six to seven T-bones, and two to three porterhouse steaks. Without the tenderloin, the short loin usually ends up as boneless strip steaks.

How to Cook Beef Short Loin

All cuts from the short loin benefit from high-heat, fast cooking methods such as on the grill, broiled, or in a 450 F oven for a short time, including the chateaubriand roast cut from the center. The short loin contains little intramuscular fat, called marbling, so cooking the meat to anything over medium, or 145 F, makes it tough and dry.

The short loin muscles don't get much exercise, so steaks and roasts cut from that area of the cow are tender and juicy, with a mild beefy flavor. Filet mignon, favored for its almost buttery texture, lacks strong flavor and for that reason traditionally gets served in steakhouses accompanied by a rich sauce such as bearnaise.

Roasts and steaks from the short loin need little in the way of preparation. These are quick-cooking cuts that need high heat and just a little flavor boost from some salt and pepper or perhaps a simple pan sauce.

Where to Buy Beef Short Loin

Whole beef tenderloins, considered "holiday" roasts, start to show up in grocery stores just before Thanksgiving. Otherwise, you may need to put in a special request or visit a specialty butcher.

These are the most expensive steaks, although they're not all created equal. That's because meat gets tougher farther back on the cow; steaks cut from the butt end of the short loin, which sits closer to the heavily used rear leg muscles, will not be as tender as a steak from the front rib end of the sub-primal. You can typically identify these by a somewhat flatter appearance and/or a tapered end. However, all meat from the short loin surpasses other cuts for tenderness.

Most cuts of beef last in the refrigerator in the store packaging for up to three days. However, any air that reaches the surface of the meat starts to cause discoloration, so it's better to consume fresh meat right away. Wrap individual steaks or roasts tightly in plastic wrap or specialty freezer paper and store them in the freezer for up to three months or use a vacuum sealer for longer storage. Tender cuts such as these do noticeably change texture in the freezer, though; considering the expense, you might want to avoid it.

Put leftover cooked beef in an airtight container in the refrigerator and consume it within three days.

Where's the Beef? Chew on These Top Beef Cuts 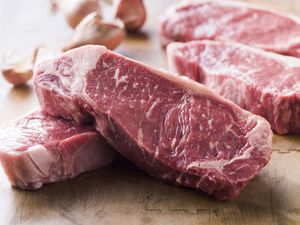 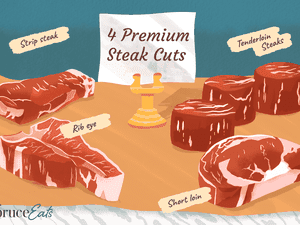 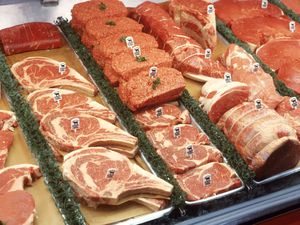 Why Are Some Cuts of Meat So Expensive?