Described as the "king of vegetables" or "edible ivory," white asparagus is both a curiosity (especially here in the U.S.) and a delicacy. But what are these pale white stalks, and how are they related to the more familiar green asparagus?

This technique of growing vegetables in the absence of light, whether by covering them with soil or by growing them indoors in a darkened environment, is known in horticulture as blanching, which is not to be confused with the culinary technique of blanching which involves briefly immersing a food in hot liquid as a step in preparation.

How to Use White Asparagus

You can serve white asparagus as a side dish, or as a component of salads, soups, casseroles and other dishes.

Because their stalks are thicker than green asparagus, white asparagus benefits from longer cooking times. While thin stalks of green asparagus can be quickly blanched, sauteed or grilled, white asparagus typically needs to be cooked by boiling or steaming. Moreover, because they have a tougher, more fibrous skin, it's necessary to peel up to two-thirds (measured from the bottom) of the stalk. You might also have to trim away the bottom inch or so of stalk.

In Europe, where white asparagus is more popular, tall, narrow cooking pots are used to cook the asparagus stalks—the bottoms simmer while the tips are cooked by the steam.

Handle asparagus carefully to minimize breakage. White asparagus is less flexible than green and can snap off, especially right behind the head.

White asparagus has a milder, more delicate, slightly more bitter flavor as compared with green asparagus. Some tasters describe it as sweet or vegetal, comparing it with peas or turnips. Just like with its green counterparts, butter, lemon and hollandaise sauce, as well as mustard and mayonnaise, are popular pairings with white asparagus.

Where to Buy White Asparagus

White asparagus is available for a relatively short period of time in the spring and early summer, starting in mid-April and continuing until around the third week of June. And because of this short season, as well as the fact that most white asparagus is grown overseas, white asparagus is somewhat of a rarity in the produce section of US supermarkets.

But that doesn't mean it can't be found. It just means that when it's available, it will be in small quantities, for a short time and for a high price. So if you're interested, check the supermarkets and specialty grocery stores in late April and throughout the month of May, and if you spot it, grab it. Avoid any bunches with dried ends (although you may not have a choice).

Like many foods with short growing seasons, white asparagus is a popular ingredient for pickling and canning. Indeed, pickled and canned white asparagus can be found year-round, though the process of pickling or canning will alter the flavor and texture of the vegetable to great degree. And it's still not particularly cheap. It's certainly worth trying, though.

Even if you're able to find domestically grown white asparagus, it has probably had to travel some distance to get to your grocery store. And of course, the imported variety has had to travel even farther. That means the sooner you eat it, the better. Preferably, the same day you bring it home.

Still, that might not always be feasible, so if you need to store your white asparagus, the best way to do it is using a clean glass jar. You might actually need two jars, since a single bunch of asparagus will likely be too wide to fit into a single jar.

First, remove the rubber band holding the bunch of asparagus together. Fill the jars about one-third to halfway with water and stand the stalks upright in the jars, with their tips pointing up. Cover the stalks with plastic produce bags and use rubber bands to secure the bags over the mouth of the jars. This technique keeps the stalks hydrated, while the humidity inside the bags helps prevent the delicate tips from drying out. Store the jars in the refrigerator, and use the asparagus within three days. 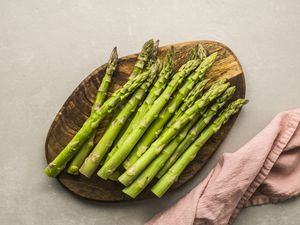 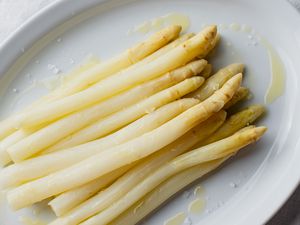 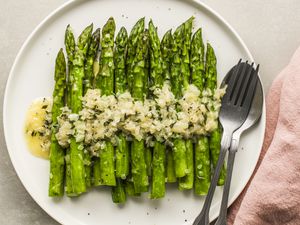 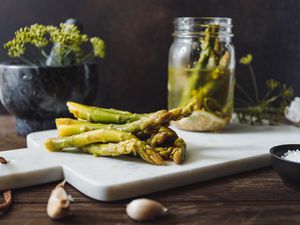 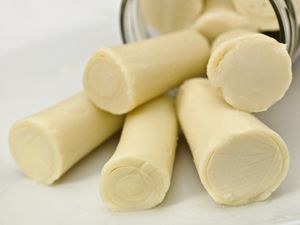 What Are Hearts of Palm?