“In fact, the confidence of the people is worth more than money.” - Carter G. Woodson

Carter Goodwin Woodson is the founding father of Black History Month as we know it today. Join our whiskey mixologist, Heather Wibbels, as she pays homage to this pioneering American icon through our newest "cocktale", Woodson's Confidence, created with ingredients historically inspired by Mr. Woodson's legacy.

A delectable yet meaningful drink, this virtual cocktail party showstopper is a fun and exciting way to soak up and soak in some Black history this February and all year long.

INGREDIENT This balanced riff on the Manhattan honoring this culturally significant Black man features the dark, herbaceous, and citrus-based Italian liqueur, Foro Amaro. The cocktail spotlights Black-owned whiskey brand Uncle Nearest 1856 Tennessee Whiskey (Uncle Nearest is the Black man who taught Jack Daniels how to make whiskey), made through the state-specific Lincoln County process of charcoal filtration. INSPIRATION This process references Woodson’s time working as a coal miner in his youth. It was at this point in his life Woodson began to mingle with other Black intellectuals at a local Black miner’s gathering place and work up an insatiable appetite for Black historical studies.

INSPIRATION Woodson's hunger for knowledge propelled him to graduate high school in two years, receive a bachelor’s and master's in history from the prestigious University of Chicago and earn a Ph.D. in History from Harvard University in 1912, where he became the second Black American in history to graduate from the Massachusetts university, known as the "Bay State" of. INGREDIENT Topped with a refreshing pour of club soda and infused with a toasted, slightly smoky bay leaf.

INSPIRATION Everything would change for Woodson in September of 1912 when he visited Washington D.C. (known as "Chocolate City") for an exhibit celebrating the fiftieth anniversary of Black progress since the Emancipation of Proclamation. Inspired by this celebration, Woodson formed the Association for the Study of Negro Life and History (ASNLH) to help the Black community go "back to that beautiful history and it is going to inspire us to greater achievements.”

The ASNLH held the first Negro History and Literature Week in 1924 during the second week of February honoring the birthdays of Frederick Douglass and Abraham Lincoln. This celebration designed to educate and promote equality was the foundation and forerunner of modern-day Black History Month. INGREDIENT To showcase this pivotal moment, a couple of dashes of chocolate bitters are sprinkled into the mix. 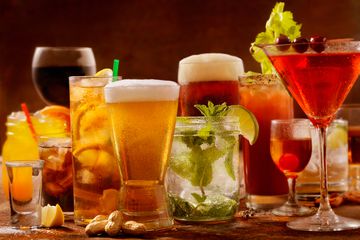 How Strong Is a Woodson’s Confidence “Cocktale”?

The exact strength of a Woodson's Confidence will depend on how much club soda is used and how much your ice melts while stirring. Uncle Nearest is a 100-proof whiskey and Foro Amaro is 60 proof—if 1/2 ounce of club soda is used and 1/2 ounce of ice melts into the cocktail, you'll have a drink that is almost 33% ABV, or 66 proof. It's a relatively strong cocktail, so sip it for the best experience.

Have You Tried These 20 Essential Whiskey Cocktails?